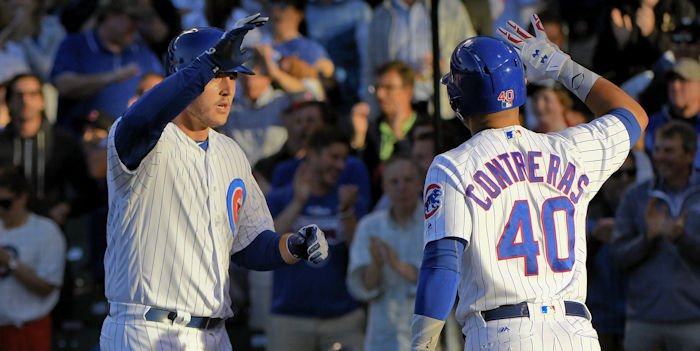 Anthony Rizzo has the fourth-most leadoff homers in baseball this year, and he has batted leadoff only seven times. Credit: Matt Marton-USA TODAY Sports

CHICAGO – To start the season, Chicago Cubs manager Joe Maddon opted to bat power hitter Kyle Schwarber leadoff, which was an unorthodox decision that did not pay off. Evidently, Maddon picked the wrong 240-pound slugger on his roster to man the leadoff spot because, in his seven games hitting first in the lineup, Cubs first baseman Anthony Rizzo has been spectacular.

Yes, a week into the Rizzo leadoff experiment, Rizzo continues to impress, specifically in his first plate appearances of games. On Tuesday night, with the San Diego Padres in Chi-Town taking on the Cubs, Rizzo provided the winning run of Chicago's 4-0 victory in the opening inning, skying a home run over the wall in center field in the first at-bat of the bottom half of the first. Becoming the first Cubs player in the last 60 years to reach base in Chicago's opening plate appearance of the game in all seven of his first seven career games batting leadoff, Rizzo now boasts a 14-game hitting streak highlighted by three leadoff homers.

Intentionally walk the leadoff man? Hey, might need to think about it against @ARizzo44. pic.twitter.com/HEXmJvf2wr

Coming off of Padres starter Jhoulys Chacin, the 432-foot Rizzo bomb proved to be enough for the Cubs to earn a victory, as Chicago starting pitcher Mike Montgomery put together his first quality outing since being moved into the starting rotation recently. Giving up no runs and only four hits in his six innings on the hill, Montgomery was excellent, showing stellar command of his pitches en route to receiving a win, his first of the season.

Chacin pitched well overall, but two mistakes early on in separate innings ultimately cost him. Of course, one was the aforementioned Rizzo yard ball. The other came in the bottom of the fourth when Chacin hit Cubs third baseman Kris Bryant with a pitch to begin the inning. Bryant next moved into scoring position with his sixth steal of the year, and, two at-bats later, Cubs shorstop Addison Russell capitalized off of that by collecting an RBI single to shallow left that scored Bryant from second to put the Cubs up 2-0. Russell finished 2-4 and has now driven in 27 RBI this season.

A second solo shot added to the Cubs' lead in the eighth, as rookie right fielder Ian Happ garnered his ninth career homer on a shot to left off of Rockies reliever Jose Torres. Later in the inning, Albert Almora, the hero of Monday's game for the Cubs, came through with a pinch-hit double to deep right that scored second baseman Javier Baez.

Leading 4-0 at that point, Cubs reliever Justin Grimm went three up, three down in the top of the ninth to secure the win for Chicago (36-34), their second straight over the Padres (28-44) and third straight overall. Rizzo went a modest 1-3 at the dish on Tuesday, but his first-inning crack of the bat was all that the Cubs needed to come out on top. Chicago will look to ride the hot-hitting ways of its star first baseman to victory yet again when the Cubs aim for a sweep of the Padres tomorrow afternoon.