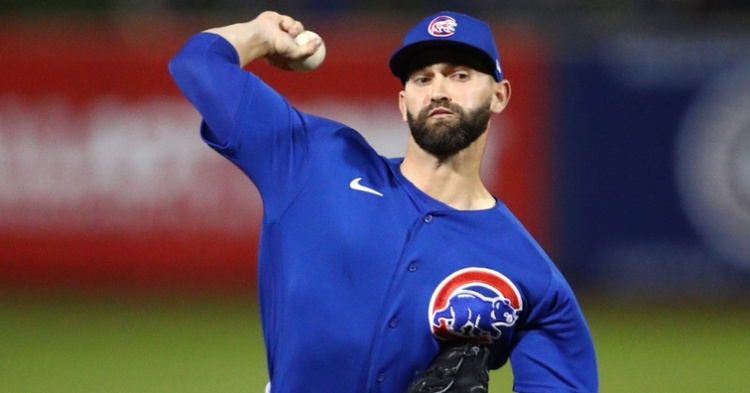 One of the questions that have followed the Chicago Cubs like a dark cloud all offseason long is that surrounding who will be the Cubs’ fifth starter.

In any given order, the top four spots in the rotation seem all but settled with a pair of right-handers and a pair of lefties. Some variation of Yu Darvish, Kyle Hendricks, Jon Lester, and Jose Quintana appear to be in line to take the ball from David Ross to start the Cubs’ first four games.

However, for that fifth spot, the starter is all but settled. Going into Spring Training, the Cubs seem to be deciding between Tyler Chatwood, Alec Mills, and Adbert Alzolay.

Chatwood seems to be the most likely to earn the job. Not only is Chatwood the most experienced of the trio, but he is also coming off of a season in which he pitched admirably out of the bullpen. Despite a bumpy 2018, Chatwood’s electric stuff has made him a valuable piece of the Cubs’ pitching puzzle. The 30-year old seems to have the respect of the coaching staff and just needs a solid spring to earn the job.

When it comes to Mills, he appears to be a reliable option - but without a ton of upside. It seems most likely that the Cubs would like Chatwood in the rotation and Mills as the swingman of the bullpen who occasionally starts, handles the long reliever duties, and sometimes dips into the high leverage spots much like Chatwood did last year. But in Mills’ few starts in the back half of 2019, he pitched admirably enough to be considered for the fifth spot. For the 28-year-old, a strong spring could very well earn him a place in the rotation.

Adbert Alzolay is a different story. While it seems nearly inevitable that Alzolay will one day wind up anchoring the Cubs’ rotation, it is unknown whether or not that time is now. In just a few starts with the big league squad last season, the results were mixed, as he also dealt with multiple injuries. Alzolay’s stuff is surely big league level, but he is yet to prove his maturity. If Alzolay can truly wow this Spring Training, he could make the roster, but he is likely to need a little longer developmentally.

With this huge question mark looming around camp in Mesa, the Cubs wasted no time in letting these players get their chance to show what they have. In the Cubs’ first three Spring Training games, it was these three pitchers that got the nod to start them.

Chatwood was next on the bump, and he gave up just one hit in just an inning on the mound against the NL heavyweight Dodgers.

Additionally, Chatwood pitched two innings and gave up only a solo homer with two strikeouts last night against the Padres.

In the third game of spring, Alzolay gave up three hits and allowed two runs in his one inning pitched — but he earned the win the Cubs’ 16-12 win over the Mariners.

Obviously, that will not be the last time these pitchers throw during spring training, so keep an eye out to see which pitcher will earn the final spot in the rotation.