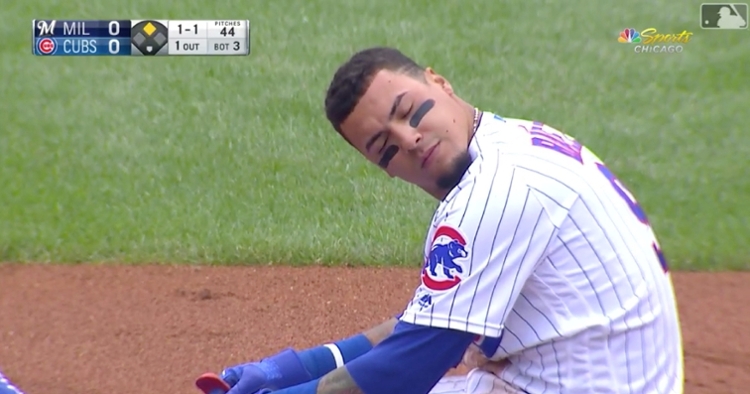 Chicago Cubs shortstop Javier Baez was injured on a headfirst slide this past Sunday and has yet to return to action.

MILWAUKEE — Three notable players for the Chicago Cubs are currently dealing with disconcerting injury issues. Shortstop Javier Baez jammed his left thumb on a headfirst slide last weekend and has missed all of this week's action thus far. In the pitching department, starter Yu Darvish was scratched from his previously scheduled start due forearm tightness, and closer Craig Kimbrel was recently placed on the injured list due to elbow soreness.

Baez's thumb issue clearly has not healed as quickly as the Cubs expected because the middle infielder is set to undergo an MRI on Saturday in order to determine the severity of the ailment. X-rays previously came back negative on the thumb. When speaking with reporters prior to the Cubs' matchup at Miller Park against the Milwaukee Brewers on Friday, Cubs manager Joe Maddon said that Baez "didn't feel right" when swinging the bat earlier in the day.

#Cubs Baez will have an MRI on his hand tomorrow. Maddon says they want to know what they're dealing with

Baez to have an MRI on his thumb tomorrow just to be sure it’s not something serious. Won’t play Saturday either way

As for Darvish, he is still slated to make his start against the Brewers on Saturday. More light was shed on the forearm issue on Friday, with Darvish telling the press that he first felt tightness in his right forearm when he threw a two-seam fastball during his July 3 start. Furthermore, Darvish revealed that several of his starts since the All-Star break have been cut short so that the tightness would not be exacerbated.

Darvish said he first felt discomfort on two-seam pitch to Colin Moran on July 3. He’s been pulled early from starts to protect against severe injury. Remains on schedule for Saturday

Yu Darvish said he first felt tightness in forearm back on July 3 vs. Pirates. Has been able to manage it. Says he’s good to go for Saturday start here in Milwaukee.

Kimbrel was placed on the 10-day injured list on Thursday and is eligible to return next Thursday. The star reliever discussed the injury with the media on Friday and did not seem concerned about his elbow, which did not bother him prior to this past Sunday. Kimbrel's MRI results came back clean, and Kimbrel is confident that he will ready to go as soon as the Cubs are allowed to reactivate him.

Kimbrel: Elbow wasn't an issue for him before Sunday. He's not concerned and remains hopeful he will return when first eligible next Thursday.

He/Cubs have a plan for when he will pick up a ball and throw again, but "I think we'll keep that to us for now."