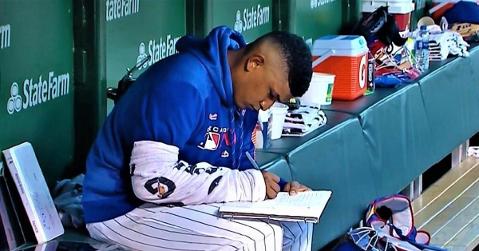 Adbert Alzolay is clearly very serious about turning his current stint with the Chicago Cubs into a full-time gig.

CHICAGO — A student of the game of baseball never shies away from a teaching moment, and Chicago Cubs pitcher Adbert Alzolay chose to teach himself by jotting down some valuable notes while in the dugout between innings on Tuesday. Making his first career major-league start, Alzolay, who pitched in the majors for the first time in a successful relief spot last week, showcased that he is willing to better himself by whatever means necessary in order to become a permanent big-leaguer.

Looking more like an NFL quarterback than an MLB pitcher, Alzolay wrote in a notebook while awaiting his turn to retake the mound early on in his start against the Atlanta Braves. Cubs manager Joe Maddon did not provide Alzolay with much wiggle room on the evening, as the youngster was pulled after tossing just 4 2/3 innings of 1-hit ball. However, Maddon assuredly noticed Alzolay's note taking and made a mental note for himself concerning Alzolay's impressive dedication to improving his craft.

Adbert hand-writing notes in between innings is a beautiful thing. Not sure I've ever seen a starting pitcher do that before. @Cubs #GoCubsGo pic.twitter.com/d7gXNLBNci