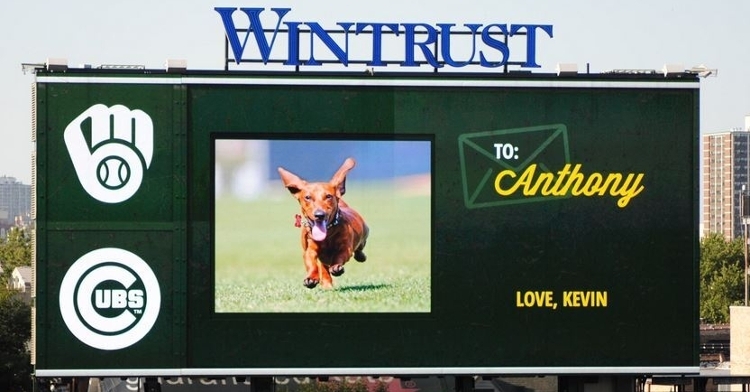 Anthony Rizzo's dachshund, Kevin, made an appearance on the Wrigley Field videoboard.

CHICAGO — Prior to Friday's Chicago Cubs-Milwaukee Brewers game, Cubs players were treated to special shout-outs from loved ones, including pets, on the Wrigley Field videobard. Kevin, Anthony Rizzo's wiener dog, made an appearance, as did Jason Heyward's puppies, Chi and Hov.

Kris Bryant received an adorable message from his newborn that included a "W" flag. The photos provided by Ian Happ's mom stole the show, though. Essentially poking fun at Happ's interesting fashion choices from his youth, the photos depict Ian as a curly-haired tot resembling a male Shirley Temple and an adolescent Ian donning what appears to be a woman's gardening hat. Kudos to Happ's mom for sharing the funny mementos.

Some special messages from the Cubs fan club. ???? pic.twitter.com/HAdAD3KTTt