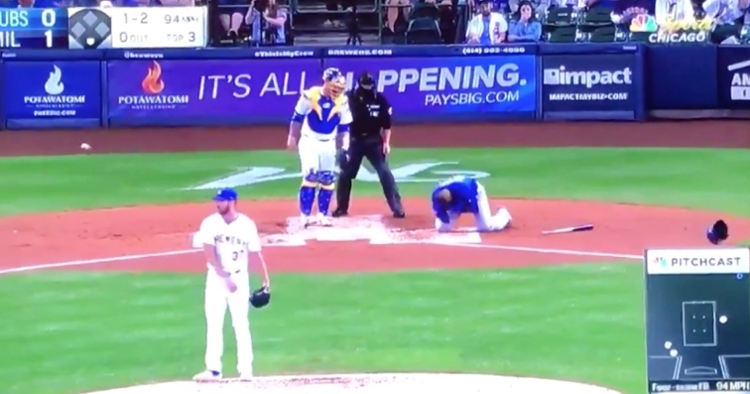 Chicago Cubs shortstop Addison Russell was able to remain in the game after being hit in the side of the head with a fastball.

MILWAUKEE — Chicago Cubs shortstop Addison Russell was at the center of a scary moment in Sunday's contest at Miller Park between the Cubs and the Milwaukee Brewers. In the top of the third, Brewers starter Adrian Houser let a pitch get away from him, and it hit Russell in the side of the head.

The fastball seemed to hit the brim of Russell's batting helmet and also made contact with the part of Russell's head near his right eye. Russell immediately went down to the ground in pain, and Cubs manager Joe Maddon and Cubs trainers came out of the dugout to check on him.

Thankfully, Russell avoided suffering a major injury and, following a thorough examination by trainers, was able to take first base for the hit by pitch. Amazingly, Russell wasted no time in stealing second base, as he swiped the bag on the very next pitch.

Then, Cubs third baseman David Bote hit a base knock to right field that advanced Russell to third base. An errant throw from Brewers right fielder Christian Yelich back into the infield enabled Russell to score, tying the game at 1-1.

Russell was pulled from the game following the conclusion of the top half of the third frame and replaced by Bote at shortstop. As a result, Ian Happ entered the contest to man third base for the Cubs.