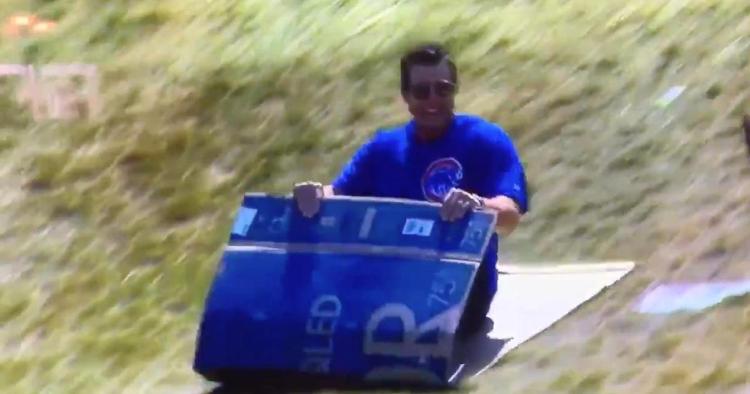 Anthony Rizzo was all smiles while sliding down the iconic hill at the site of the Little League World Series.

WILLIAMSPORT, Pa. — The Little League World Series tradition of sliding down the hill behind BB&T Ballpark at Historic Bowman Field on a piece of cardboard was incorporated into the 2019 MLB Little League Classic. With the Chicago Cubs in town to take on the Pittsburgh Pirates in the third annual installment of the event, Cubs manager Joe Maddon and Cubs first baseman Anthony Rizzo took part in the downhill fun.

Joined by former Cubs catcher and current ESPN commentator David Ross, Maddon and Rizzo, who also played catch with a kid in attendance, visited the hill during the Little League World Series action on Sunday afternoon, and the fun-loving Maddon and Rizzo happily coasted down the hill on cardboard sleds. The 65-year-old Maddon showed that age is just a number as he flew down the slope with his hat on backwards, garnering plenty of cheers from the fans on hand.

Enjoy this video of @ARizzo44 living his best life and sliding down a hill at the Little League World Series. pic.twitter.com/HwhMvXItlN

Update: Cubs third baseman Kris Bryant and Cubs starting pitcher Cole Hamels later joined in on the fun by sliding down the hill on cardboard sleds of their own.