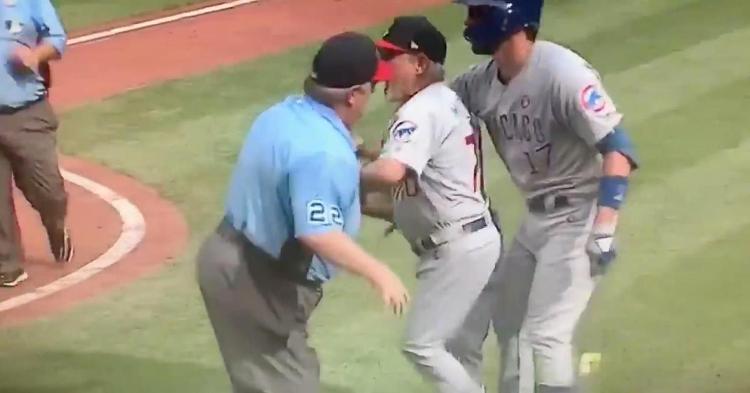 Joe Maddon was livid with Pirates manager Clint Hurdle over the excessive number of high, inside pitches throw by Pirates starter Jordan Lyles.

PITTSBURGH — Sick and tired of Pittsburgh Pirates starting pitcher Jordan Lyles throwing high, inside pitches, Chicago Cubs manager Joe Maddon was ejected for barking at a combination of home-plate umpire Joe West and Pirates manager Clint Hurdle. Adding some flare to the Independence Day duel at PNC Park on Thursday, Maddon was perhaps the angriest he has ever been in his managerial career and had to be held back by West in an attempt at charging after Hurdle.

Lyles threw too many high, inside pitches in the early goings of the game for the Cubs' liking, and it culminated in Cubs shortstop Javier Baez complaining to West about it during his fourth-inning at-bat. Right after complaining, Baez faced a high, inside pitch that hit off the knob of his bat for a foul ball. Maddon then chimed in from the dugout, and West, who is known for dishing out ejections rather abruptly, wasted no time in tossing Maddon.

An interesting turn of events followed, with Maddon storming out of the dugout but not because he wanted to confront West. Instead, West had to team up with the Cubs' Kris Bryant in holding Maddon back from confronting Hurdle, who chirped at Maddon from the home dugout. Maddon was clearly irritated with Lyles' continual usage of high, inside pitches, and he blamed Hurdle for it. After calming down, Maddon walked back to the visiting dugout and then vanished into the clubhouse, with the veteran skipper getting sent to the showers with his team leading 4-3.

Joe Maddon upset with Pirates manager for the high inside pitches. Goes after him. Is he trying to fire his listless team up? pic.twitter.com/tqwwCbVbQO