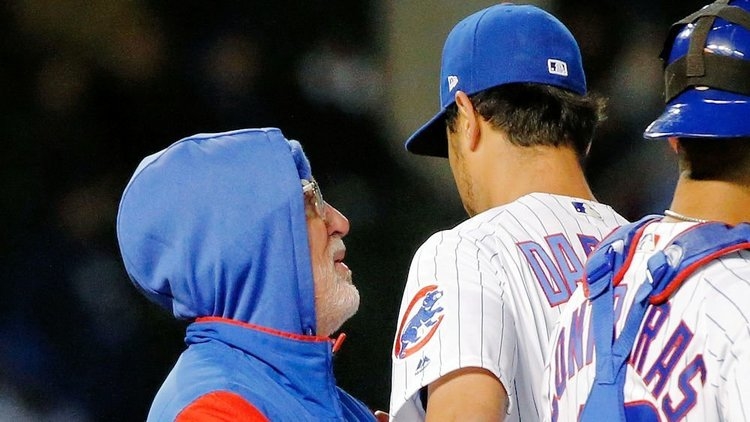 Weirdness was the theme of Chicago Cubs manager Joe Maddon's postgame press conference following his club's exciting 9-8 win over the Colorado Rockies on Wednesday night. Maddon himself was not weird. Rather, his comments continually harkened back to the weird nature of the contest that had just taken place.

The Cubs never trailed on the evening and could have easily won quite comfortably. However, a couple of Rockies scoring barrages that seemingly came out of nowhere kept Colorado in the game and made the pitching duel that took place early on somewhat meaningless. Not a single run was scored through the first 4 1/2 innings, as Cubs starter Yu Darvish battled with Rockies starter German Marquez, but a combined 17 runs were tallied after that.

"I thought he made one bad pitch all the night," Maddon said of Darvish. "I thought he was outstanding. It's weird that this game ended up 9-8."

Darvish was pulled after giving up a run in the top of the sixth. The one bad pitch that Maddon referenced came on a 1-out double hit by the Rockies' David Dahl, which was followed by an RBI single. Handed a no-decision for his efforts, Darvish was unable to accrue his first-ever winning decision at Wrigley Field, as all of his winning starts with the Cubs have come on the road.

Maddon also addressed the weird weather that made for a spooky night at Wrigley Field. During the early innings, an eerie fog rolled in and hovered over the Friendly Confines for quite some time before disappearing and then reappearing toward the end of the contest.

Speaking on what he coined the "London fog," Maddon said, "It was so weird. I was looking for Stephen King in the stands somewhere. It was that strange."

Cubs infielder David Bote made sense of the weirdness by amassing seven RBI as part of a pivotal 4-for-4 performance at the plate. Continuing to show off his trademark "clutch gene," Bote led the way for the Cubs as they eked out their third straight victory.

#Cubs manager Joe Maddon on the close win vs the #Rockies pic.twitter.com/KJnwaVBUB1