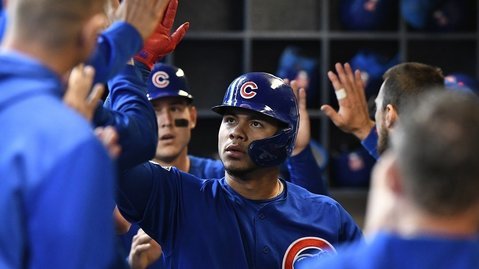 CHICAGO — A mysterious ejection, which was not made public until after the game, took place at Wrigley Field on Saturday. During the course of the Washington Nationals' 7-2 victory over the Chicago Cubs, Cubs catcher Willson Contreras, who is currently on the injured list, was thrown out for shouting at the umpires from the dugout.

When pinch hitting for the Cubs with two outs and the bases loaded in the bottom of the fourth, Ian Happ got rung up on a questionable strike-three call, as the pitch seemed to be outside. Happ was livid with the home-plate umpire after the strikeout and was ejected for voicing his displeasure. It is unclear exactly when Contreras, who was unavailable to play, was tossed, but it was assuredly soon after Happ's strikeout.

Maddon went out to talk to the umpires in the 5th inning because Willson Contreras had been ejected for yelling from the bench.

While the ejection made for an unfortunate ending to Contreras' day at the ballpark, the backstop showed positive signs pertaining to his injury recovery earlier in the day. Contreras is working his way back from a fairly severe hamstring strain suffered in early August, and the Cubs are hopeful that he will be able to return to action in early September.

Completing throwing drills from behind the plate at the Friendly Confines, Contreras made throws to the edge of the infield while standing up, which was a promising step forward in his recuperation. Afterward, Contreras chatted with fans in attendance, gave his batting gloves away to a young fan and signed souvenirs for a handful of other kids.