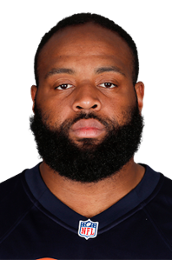 Played in 15 games with 15 starts, missing the Week 12 game at the Packers with an injury
Recorded six tackles and two QBH in the Wild Card playoff game at the Saints
Had a team-high 21 QBHs on the season; recorded 3.5 sacks for minus-23.5 yards
Recorded 1.5 sacks in the Week 3 win at the Falcons, where he also had a career-high 5 QBHs; added 3 QBHs in the Week 15 win at Minnesota
Recorded 1.0 sack for minus-9 yards in the Week 1 win at Detroit; also had four tackles in that game with one QBH
Had his second sack of the season in the Week 2 win over the Giants to go along with three tackles
Season-high six tackles in Week 4 vs. the Colts, including one TFL and two QBH
Recovered a fumble and also added a TFL in the Week 6 win at the Panthers

Started five games in which he played, recording 10 tackles, 1.0 sack, one fumble recovery and one TF
Placed on Injured Reserve on 10/15 after suffering an elbow injury against the Raiders in London
Activated from Injured Reserve on 12/14 and recorded four tackles and two QBH in Week 15 at GB

Named to his first Pro Bowl after starting 16 games and recording 55 tackles, 7.5 sacks, 12 tackles for loss, five pass breakups and three forced fumbles
Recorded a career-high five tackles for loss vs. MIN (11/18
S)cored on a one-yard touchdown run at NYG (12/2)
Led team in tackles for loss and was second on the team in sacks
Recorded four tackles and one tackle for loss in Wild Card playoff game vs. PHI (1/6/19)

Started all 16 games, recording 54 tackles, 15 TFLs, 2 fumble recoveries and a career-high 8.5 sacks for a loss of 57 yards
Recorded 20 QBHs, the most by a Chicago Bear in single-season since the stat was tracked in 2006

Started all 16 games at DE, setting a career-high in tackles (71), sacks (7), pass breakups (3) and forced fumbles (2), 5 TFLs and recovered 1 fumble
Only defensive player to start every game

Started 14-of-15 games, posting 41 tackles, 2 sacks and 7 TFLs
Placed on Injured Reserve prior the season finale

Posted then career-highs in tackles (56), sacks (4.5) and TFLs (8)
56 tackles were the most among the Saints defensive front
Started both of the Saints' postseason contests, notching 7 tackles and 0.5 sacks

Appeared in 14 games with the Saints as a rookie, tallying 20 tackles, 1 pass breakup, 2 TFLs and 1 forced fumble