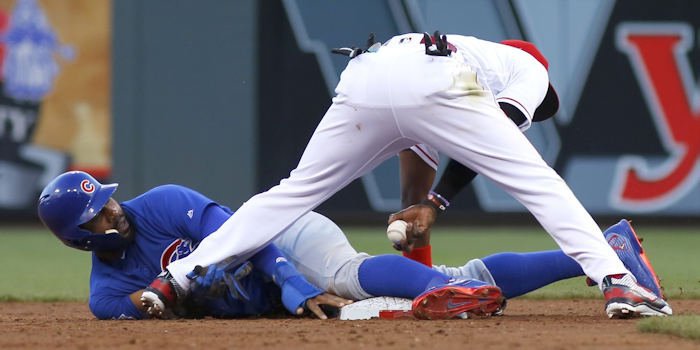 The Reds hit three homers in one inning, and the Cubs gave up a season-high runs in a 13-5 loss to Cincinnati on Saturday night. It was the first win for the Reds over the Cubs in six tries this season.

It was only the fourth time in eighteen games the Cubs have allowed more than three runs in a game this season.

John Lackey (3-1) entered the sixth inning with a 3-2 lead but surrendered a three-run home run to Eugenio Suarez. Then after a single, Lackey was lifted for Trevor Cahill. Devin Mesoraco singled, and then Adam Duvall hit the second three-run home run in the inning. Scott Schebler capped the inning with yet another homer to give the Reds a commanding 9-3 lead.

The Cubs were able to get two runs back in the seventh on RBI singles by Jason Heyward and Ben Zobrist, but a two-run homer run by Joey Votto in the bottom half sealed the game for the Reds.

"Give them credit," Cubs manager Joe Maddon said after the game. "They hit the ball really well tonight. They beat us."

Addison Russell hit his second home run of the year in the second inning off of Dan Strally.

Coming into the game, the Cubs had outscored their opponents by 67 runs this season, 105-38, the best run differential in the majors, but it was a different story on Saturday night.

The Cubs will face the Reds on Sunday at 12:10 pm CT in the finale of the four-game series.