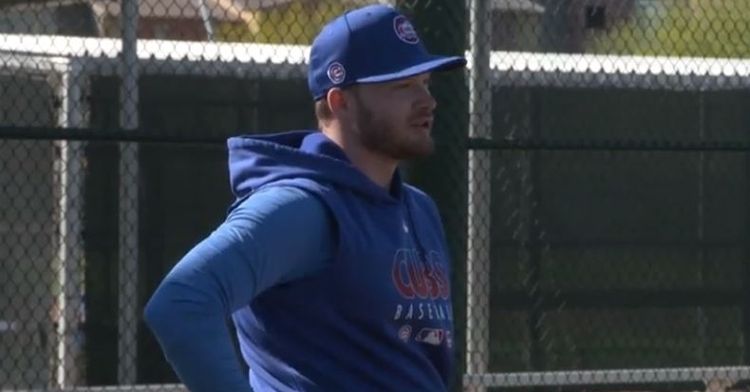 The Cubs got right back to it on Monday morning as players arrived at camp including Kris Bryant, Javy Baez, Kyle Hendricks, and more in the following photos:

Anthony Rizzo is all smiles as he is getting to play baseball again under second-year manager and his friend David Ross:

Rizzo spoke with the media on Monday and was asked about a possible contract extension with the ballclub as contract talks continue this spring.

"Just go out and be me, and play well, and I know the money aspect and business side will take care of itself," he said.

All negotiations he said going forward will be between him and his agent, which is pretty standard protocol.

"We control the narrative in here. We control how we go about our business every day," he continued. "We're going for it, and we're going to be right in that mix this year, and we're excited."

Rizzo has nothing but love for the city of Chicago.

Rizzo won't have any regrets during his playing days.

"I'll look back with no regrets because just every day, you just enjoy it. It's too short. Life's too short. The game's too short. All the cliches. But, I really do live my life that way."

Rossy talked to the media about how excited some of the players ready to get some work in including Kris Bryant, Jason Heyward, Kyle Hendricks, Shelby Miller, and more:

A few shots of the action at Sloan Park on Monday afternoon:

A clip of Javy Baez fielding a simple groundball and another video of Willson Contreras:

Check out the full Cubs camp highlights from Sunday's workout session, courtesy of the Cubs:

If you are a fan of Cubs bobbleheads, check out this sneak peek of two giveaways for the 2021 season:

It should be interesting to see how well new Cubs pitcher Zach Davies does this year donning the Cubbie blue:

It was MLB's 4th-most valuable pitch in 2020. Kyle Hendricks, whose locker is now right next to Davies', knows a little about changeups, too pic.twitter.com/XPR45ef8Qq

One year ago, the Cubs were already playing a spring training game as Willson Contreras went deep:

One year ago, the @Cubs played their first spring training game of 2020!@WContreras40 put on a show ?? pic.twitter.com/G4fU8pC6gz

The contract has another $1.25 million in performance bonuses. Best of luck to Jeffress as another former Cubbie goes to Washington.

This is just a really cool retro pick of Cubs legend Ernie Banks and iconic Jackie Robinson. RIP to both of these legends!

Another retro pic of a young Lou Brock in a Cubs uniform.