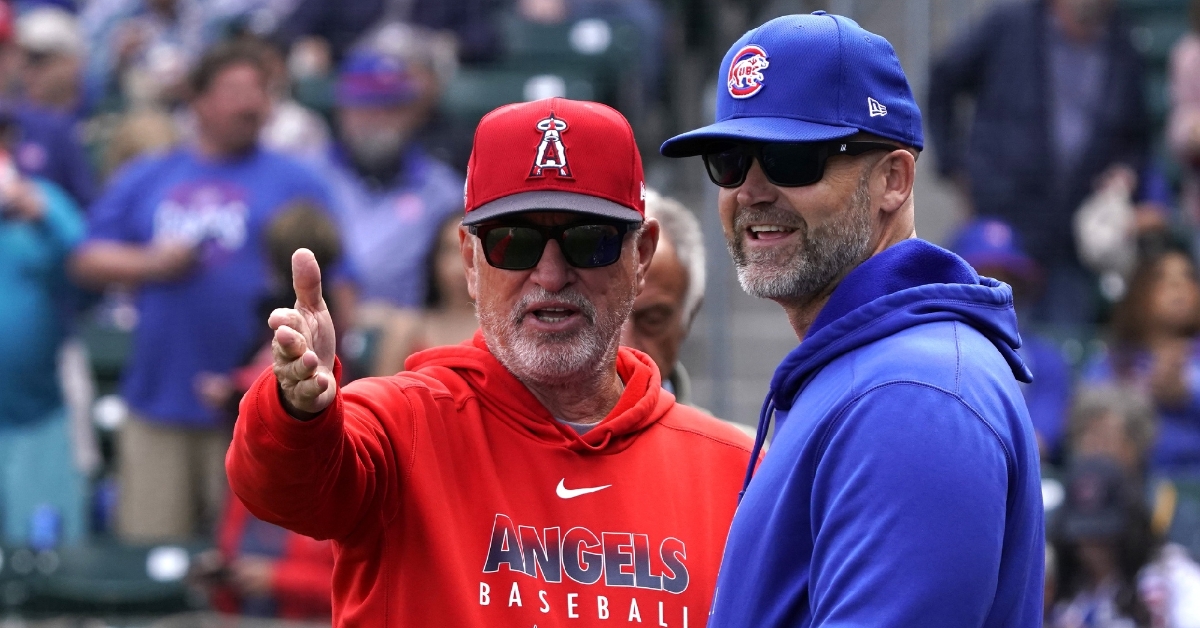 Fresh off a 7-3 win over Seattle yesterday, the Cubs split the squad for dual action today. In the headliner, the Cubs (4-5) hosted Joe Maddon and his Angels (4-5), with the second game later tonight (@ Hohokam Stadium vs. Oakland, 8:05 PM).

For a little added entertainment, insight, and comedy, ESPN mic’d up Kris Bryant and Anthony Rizzo.

Kris Bryant and Anthony Rizzo are mic’d up during the middle of the game and the guys in the ESPN broadcasting booth had to tell them they are wearing two different hats in the field right now.

Kris Bryant: “We wear what we want” ?? (Via @TheBlogfines) pic.twitter.com/RnUwiY8rQ1

T-1 Kyle Hendricks works a 1-2-3 frame, helped out by Ian Happ, who made a great diving catch to rob Tommy La Stella. A pair of groundouts ended the frame.

T-2 The Professor got back to work, starting the inning with a 3-1 groundball putout. Hendricks would then fan the next man before getting a grounder to end the frame (GO-4).

T-3 The Professor keeps the no-hitter intact with a ground ball to third and a pair of K’s, which featured some nasty breaking pitches.

B-3 Steven Souza (FO-8), Ian Happ’s bomb to center would break up the Halos’ no-hitter and put the Cubs on the board. Nico Hoerner singles to CF, KB (K), Rizzo with a quiet joke about cheating before singling to right-center (Hoerner to third). Mendoza asks, “What’s he throwing here?” Rizz responds, “I have no idea. I wish someone would bang for me.” Contreras grounds to the hole, but 3 AM is there. Cubs lead 1-0.

B-5 Nothing for Chicago: Souza singles to the right, Happ hits into a double play and Hoerner fans. Cubs still lead 1-0.

T-6 Cotton would give up a single, but then even worse, served up a home run ball to Tommy La Stella. Cubs trail 2-1. Cotton replaced by RHP Juan Gamez. (I have no idea who this is, he’s not even on the spring roster…): (GO-4)(GO-6).

B-6 Verdugo and Rivas would both walk to start the frame. Baez singled to load the bases (Zack Short pinch runs), the Schwarbs come through with a 3-RBI double to center. Trent Giambrone runs for Schwarber, Miguel Amaya bats for Contreras, grounds out to short. Caratini hits a fair ball to the right side, but the inattentive ball-boy (aka60-ish-year-old man) picks it up, so it’s ruled a ground-rule double, but Giambrone scores. Souza (K), Davis doubles (Caratini scores), Hoerner FO-8. Cubs lead 6-2.

Alfonso Rivas has a walk and a triple today. Just pulled a liner down the right-field line and flew around the bases. Or maybe it just looked like he flew when comparing him to most other first basemen.

The Professor was working on his curriculum today against the Angels. pic.twitter.com/UOZci3Qx3D