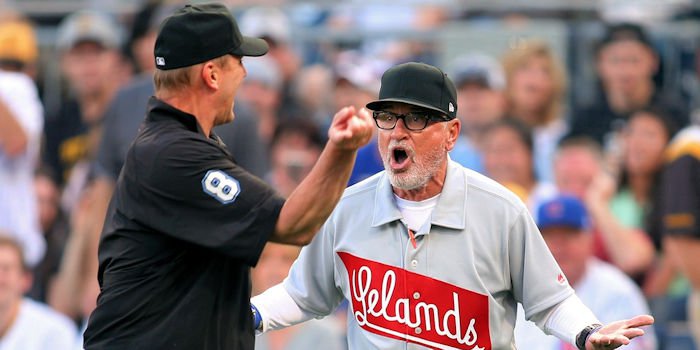 Clearly inspired by the fiery display of emotion from manager Joe Maddon at the game's start, the Chicago Cubs refused to go quietly. Credit: Charles LeClaire-USA

PITTSBURGH – Lately, the woebegone Chicago Cubs have struggled with giving up early leads and being relatively impotent offensively in attempting to recover said leads. In Friday night's clash with the National League Central rival Pittsburgh Pirates, the tables were turned, however, and the Cubs of old resurfaced to produce some late-inning magic. Winning 9-5 thanks in large part to a six-run ninth inning, Chicago overcame a shaky start by pitcher Eddie Butler that resulted in a 3-0 lead disappearing by producing at the dish when it mattered most, collecting over half of their 11 hits in an epic last-inning comeback.

Prior to the ninth inning for the ages, the Cubs continued their recent trend of scoring quickly and gradually tapering off at the plate in tonight's game, putting their only three runs of the first eight innings on the board in the opening inning. That three-run total could have been more, but a home run by leadoff success story Anthony Rizzo was overturned.

With what would have been the third consecutive game in which Rizzo hit a home run in the first at-bat of the contest, the homer was ruled foul after the umpires discussed it on-field and confirmed it via video replay. Beside himself over the final decision, Cubs manager Joe Maddon became irate when confronting the crew chief over the call, getting ejected three pitches into the game as a a result.

Here's a photo of the #Cubs throwback unis (and of Maddon just before he was ejected) pic.twitter.com/ZUs6B9Yl15

Perhaps inspired by the ejection of their commander-in-chief, the Cubs proceeded to tack on three runs in the first frame, putting together a two-out rally. After a series that featured a walk of Rizzo and an ensuing single and two fielder's choice groundouts, Cubs right fielder Jason Heyward drew a walk to load the bases. Chicago then capitalized off a mistake by Pirates starting pitcher Trevor Williams, who threw a wild pitch that scored Cubs shortstop Addison Russell from third. Chicago catcher Willson Contreras next came through in the clutch, doubling to deep right and driving home two more runs. Contreras, who brought in an additional run later in the game, now has 28 RBI on the season.

In the top of the second, the Cubs had a golden opportunity to increase their lead but ended the inning in polar opposite fashion as compared to the first inning. Instead of a two-out rally, they completely wasted an easy scoring chance. With a leadoff double by second baseman Tommy La Stella and a proceeding single from Butler, the Cubs sported men on first and third with no outs. However, three consecutive outs resulted in no runs being scored and the Cubs coming up empty-handed, something that could very well have come back to haunt them.

The Pirates accrued eight hits on the evening, and they made the most of them, bouncing back after a slow start at the plate. First baseman Josh Bell incited the Bucs with a homer to start the bottom half of the fifth. Bell finished 2-4 with three RBI in a highly productive night with the bat. Bell produced in a major way yet again the following inning, tripling with two outs to score two runs and tie the Cubs up at three runs apiece.

The triple also managed to chase Butler from the game, marking the second straight frustrating start for him. In 5.2 innings pitched, Butler was credited for giving up four earned runs on four hits and three walks. The fourth earned run occurred on an infield single by Pittsburgh veteran Andrew McCutchen off of Pedro Strop in the first plate appearance following Butler's departure.

Thereafter, with the score reading 4-3 in favor of the Pirates, offense was at a premium for both teams until Chicago starlet Ian Happ hit a double to left in the eighth inning. However, the Cubs faltered yet again with a runner in scoring position, and Happ, who went 2-5 with one run scored, was left stranded.

Chicago would not waste an auspicious scoring chance in the top of the ninth, though, performing well in the clutch with the game on the line. With his lone hit of the game, Heyward doubled off of Pirates reliever Juan Nicasio to begin the ninth, and, soon afterward, Contreras smacked his second double of the matchup on an RBI hit to right.

After a La Stella single and an understandable intentional walk of reigning National League MVP Kris Bryant, the Pirates found themselves in a bases-loaded jam with the game standing at four all. Chicago then opened the proverbial floodgates, scoring five more runs off of recently-maligned Pirates reliever Tony Watson, who lost his job as the team's closer last week.

Contreras scored what was ultimately the winning run on an RBI single by Cubs outfielder Jon Jay. Rizzo next collected a two-run single, as well as sweet redemption from his first-inning debacle, to put the Cubs ahead by a score of 7-4. A few at-bats later, Russell capped off the six-run ninth-inning scoring barrage with a two-run hit of his own, doubling toward the wall in center to clear the bases and place the Cubs atop the Pirates 9-4.

Despite the non-save situation, closer Wade Davis came in to finish the game off for the Cubs in the bottom of the ninth, as Chicago clearly wanted to walk away with a "W" after all of the dramatic twists and turns of Friday's game. Davis did not fare well at the start, giving up a double to McCutchen that was followed up by an RBI single from Pirates catcher Francisco Cervelli. After a series of events that included an infield single, a fielder's choice grounder that outed the lead runner at third and a walk that loaded the bases, Davis buckled down, earning two consecutive swinging Ks to end the scoring threat, as well as the game.

Although Watson was the true goat of the game for the Buccos, Nicasio was officially handed the loss to fall to 1-3 overall, while Cubs reliever Koji Uehara (2-3) earned his second win of the season. Whether it is publicly attributed to the charming throwback uniforms sported by the Cubs on Friday night or the inspiring ejection of Maddon in the opening act of the contest, the Cubs' comeback was highly impressive, regardless of what catalyzed it. Riding high off of the momentum of the 9-5 victory over Pittsburgh (30-37), Chicago (33-33) will aim to continue its hot-hitting ways in the remaining two games of this series at PNC Park, as the Cubs are looking to gain ground in the divisional standings and gain steam in their quest to reestablish themselves as the top dogs (or bears) of Major League Baseball.