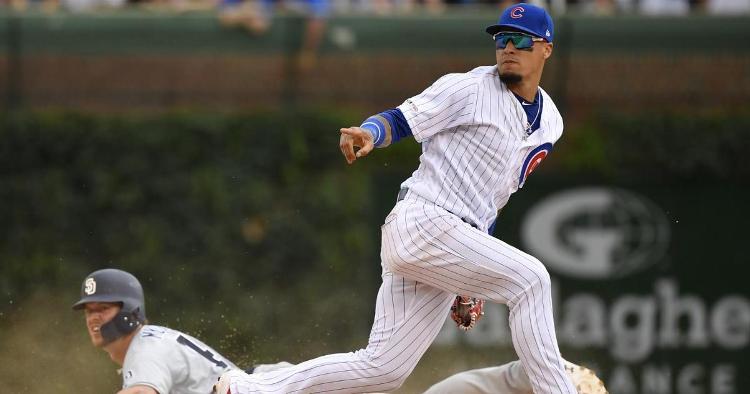 I’ve heard since I was a Little Leaguer way back when that defense wins pennants. I don’t know who coined that phrase, but I do believe there is some legitimacy to the theory. Defensive stats are not as glamourous as offensive ones, but they are important all the same. In 2016, the Cubs won the World Series with a stellar defense and led the majors with the lowest runs allowed per game. The average is not always equated to pitching, although the Cubs pitching staff led the majors in ERA in 2016. The Cubs found it is a total team effort to keep runs off the board.

The Cubs, for one reason or another (probably because their pitchers pitch to contact) are always among the league leaders in total defensive chances. The unfortunate thing for the Cubbies defense is their errors have begun to climb. Many people will point to a manager who played his players in positions they were not used to playing. The Cubs carousel in the outfield has seen Kris Bryant, Willson Conteras, Ben Zobrist, Ian Happ, Doug Descalso and Mike Montgomery (a pitcher no less) who are all better suited at infield positions then chasing after flyballs. Other teams don’t seem to do that a lot and it could be a contributing factor in the Cubs defensive malady.

In comparing fielding percentage over the last four years, one will find the Cubs hovering right around the .983 mark. In 2016, the Cubs fielding percentage was .983. Coupled with the outstanding pitching and relievers they had that year and the prolific offense, the Cubs ran away from their Central division rivals and their errors or fielding percentage did not seem to matter much. In the years since, in the highly competitive Central division, keeping runs off the board is at a premium as wins are at a premium. Since 2017, the Cubs error total has been climbing and in 2019 only Seattle and Pittsburgh had more errors. It makes one think that if the team could cut down on errors, maybe it would equate to more wins. Finishing seven games behind the Cardinals and five behind the Brewers for a Wild Card berth hurts when you consider the possible effect of a faulty defense and five or six more wins.

So, what is it Manager Dave Ross is looking for this spring to position the team for more wins in 2020 and another pennant? Is defense the premium or is it offense? Defense wins championships… remember? Another way of thinking could be, let’s just outscore all the other teams…we don’t care how many runs the other team scores as long as we score more. It makes sense that many a decision is made exactly with these things in mind. Why else, even though he had a slight resurgence offensively in 2019 would the Cubs keep playing Jason Heyward? Because he is one of the best outfielders in the National League in preventing runs and the Cubs have plenty of guys in the lineup that can hit. It is the complete opposite reason the Cubs picked up Nick Castellanos last year, the offense needed a little pick me up. He definitely wasn’t picked up for his defensive prowess. So, what is Rossy looking for in 2020 for positions he needs to fill? Anybody that can produce at the plate will probably be playing second base and the revolving door may get dizzying as Ross tries to find the right mix. Last year, Cubs second basemen were in the top five in errors. Joe Maddon tried to utilize the hottest player available that could play the position whether it was Russell, Descalso, Happ, Hoerner, Bote or Garcia. The same could be true this year with Kipnis, Hoerner, Garcia, Bote, Happ, and Descalso all trying to fill the gap. I am sure that group is not leading with defense.

The same is true in the outfield. The Cubs have made a catcher into an everyday left fielder. Schwarbs has turned into a pretty decent fielder, but again he is out there for his bat. Steve Souza is trying to win a job in right and if he does will then give some flexibility to play JHey in center. Probably the best fielder of all the outfielders is Albert Almora, Jr. If he can regain some of his offensive form at the plate, he could find himself as the everyday centerfielder, something the Cubs haven’t had since Dexter Fowler left. Almora is young and is one of the Epstein pieces to yet fall in place. If he can become the everyday centerfielder then the Cubs would have a pretty formidable outfield from both an offensive and defensive perspective. Oh, by the way, they haven’t had a leadoff hitter since Fowler left either. It is trending that Cubs management is once again going to platoon center field with someone who is hot at the plate unless it is the late innings and the Cubs are protecting a lead.

So, where do you fall in the theories of what connotates wins in 2020 for the Cubs? A stellar defense? A powerful offense? Oh, now you might say “pitching wins championships.” The Cubs pitching should be serviceable enough to keep the team in most games. What will Ross decide is the premium…offense or defense?