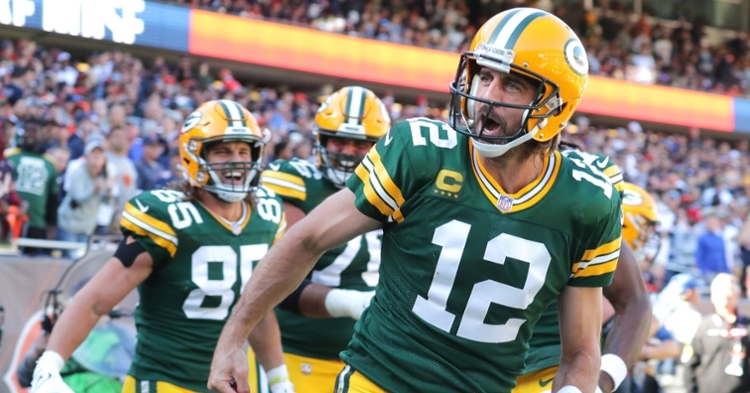 I OWN YOU! You heard it live, you will hear it this week, and you will hear it the rest of the season. Following Aaron Rodger's late-game touchdown run, which essentially sealed the game, the Packers quarterback broke out the Championship belt and turned to the crowd and screamed, I Own You.

As painful as that was for Bears fans to hear, in a way, he isn't wrong as the longtime signal-caller has posted a 21-5 record against the Bears since becoming the team's starter. Keep in mind, this was a trend that has continued after Brett Favre dominated them for 16 years himself, so the Bears are

frustrated with how things have gone for the past 30 years.

The best way for the Bears to change their narrative against the Packers is to figure out how to beat the Packers, which hasn't been the case lately. Once again, the Bears played very well for three quarters, but they still somehow come up short in the end. That is something that is all too common for this team, and it needs to change for them to get back on top. Here are some takeaways from yesterday's loss.

Justin Fields still has a lot to learn

When the Bears drafted Fields with the 11th pick of the 2021 NFL draft, fans immediately were up with jubilation as they felt he would be the quarterback of the future. Although Andy Dalton was named the starter out of camp, many believed it was only a matter of time until Fields got on the field, which happened in week 2.

Since then, Fields has been the starter and will now be the starter for the foreseeable future unless something drastic happens. No one will argue the overall athletic ability and traits that Fields brings to the table, but he is a rookie and is a long ways away from being the starter the Bears are hoping for.

Like most rookie QBs, Fields is going through the growing pains that most rookie QBs go through. Sure, he has his moments where you can see the potential that he has, but then he makes careless decisions like his almost intercepted pass in the fourth quarter that he tried to fire to the end zone. Those are the types of plays he needs to eliminate.

No one is saying that Dalton should return as the starter this season, but when you look at the Bears upcoming schedule, wins may not be easy to come by.

If I am Matt Nagy, I have Dalton ready every week to come off the bench in a relief role, much like Nick Foles did while with Philadelphia. That would give the Bears opponents two quarterbacks to prep for and give the Bears other chances to win.

Eddie Jackson is officially a liability

It is amazing how fast the mighty have fallen. After being one of the best safeties in the league not that long ago, the Bears rewarded Jackson with a lucrative contract to make him one of the highest-paid safeties in the game. What looked like a brilliant signing at the time is starting to smell like regret as Jackson is a liability on defense.

Not only is he not forcing the turnovers he once was, but it seems like he has forgotten how to tackle in the process. Whether he is afraid to hit because of penalties or what, Jackson's tackling has been atrocious this season, and it showed up once again when Davonte Adams hauled in a long pass to set up the eventual knockout blow.

While the tackling has been an issue, Jackson's overall play is drawing plenty of criticism from others outside the organization. You can go back to week one when Matthew Stafford tore the Bears apart while catching Jackson out of position on plenty of passes. That can't happen to a veteran like Jackson, and at this point, the Bears need to cut ties with him and see what they can get for him.

It is no secret, but Rodgers owns the Bears. In a rivalry that has been going on for the past 100 years, it has been the past 30 years where the Packers have taken the Bears to the woodshed. Between Favre and Rodgers, wins have been hard to come by for the Bears, but Rodgers especially has been unkind to Chicago.

From knocking off the Bears in the NFC title game at home to helping erase a 20-point second-half deficit during opening week in 2018, Rodgers has had plenty of moments that have made Bears fans cringe. After running in the eventual knockout touchdown yesterday and turning to the crowd to say I Own you, he continues to haunt Bears fans.

With a 21-5 record against Chicago since taking over as the Packers starter, Chicago fans are counting down the days where he either retires or finds a team somewhere else. Facing him once every four years as opposed to twice a year will be a pleasant sigh of relief for Bears fans as the three-decade-long nightmare continued on Sunday.

Aaron Rodgers yelling "I still own you" to Bears fans ??