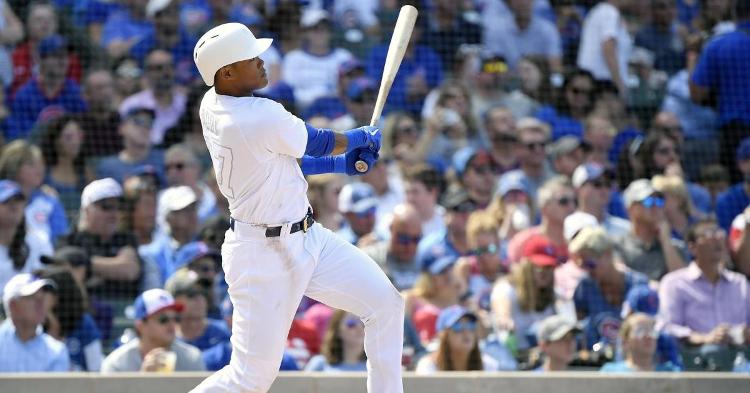 Saturday’s game cemented the series loss for Chicago, only the second home series loss all year. With that, Cole Hamels and the Cubs attempted to avoid the embarrassment of being swept at home, as they faced Stephen Strasburg and the Nationals for the series finale.

Once again, the Nats would draw first blood, courtesy of Anthony Rendon’s bomb in the fourth. The Cubs would flash a little light of their own but failed to score. Nats up 1-0 after four.

In the fifth, Hamels would pitch himself out of a jam, helped in part by great defense from his infield. Addison Russell would help the team with a solo-shot in the Cubs’ half of the fifth. Game tied 1-1.

Unfortunately, the Nats would jump right back in the sixth, retaking the lead 2-1, as Juan Soto scored from third as the Cubs were turning a double play.

Nationals plate a run with a GIDP in the 6th to take 2-1 lead. That's five runs in three games via outs (groundouts or sac flies).

Maddon pregame: "Scoring runs with outs is an art form that we have to accomplish, too."

Jason Heyward would reach base for Chicago, after being hit by a pitch in the sixth, then would advance to third on yet another hit by Castellanos. With runners on the corners and nobody out, Kris Bryant would next deliver an RBI single to tie the game at two.

As Nationals huddled up for a mound visit, Castellanos sprinted over to first base to congratulate Bryant and bump him on the chest in excitement for the big hit.

Strasburg would get the next three (Javier Báez, Kyle Schwarber, and Jonathan Lucroy, limiting the damage to just a run. Game tied 2-2.

Rowan Wick would struggle in the seventh, leaving a bases-loaded mess for Kyle Ryan. An infield single by Soto, followed by a line-drive single to the right by Cabrera would put the Nats up 5-2. Brandon Kintzler would get the final out, but not before the damage was done.

Victor Caratini would hit a smash to right to start the bottom of the seventh, bring the Cubs to within two.

After Kintzler held the Nats in the eighth, Javier Báez drew a two-out walk in the bottom of the inning, followed by a monstrous, Schwar-BOMB to left, to tie it at five.

Craig Kimbrel held down the ninth, but the Cubs failed to score. Now in extra innings, both teams would survive the tenth, but the Nats would get to Tyler Chatwood for two runs in the eleventh.

Again, unable to rise to the occasion, the Cubs would wind up not only losing the game but getting swept and falling another game back in the standings to the Cardinals. Final score: Nats - 7; Cubs - 5

The injury bug bites again: If there’s one thing the Cubs certainly don’t need, it’s seeing Anthony Rizzo sidelined with more back issues. Rizz was pulled from Saturday’s game due to back tightness. Even if Rizz doesn’t hit the IL for this issue, the Cubs will undoubtedly have to use him a little more conservatively for the next little while, causing them to lose not only a quality first baseman but also a powerful bat which has come alive over the last week. Rizzo was not in yesterday’s lineup.

According to Joe Maddon, Rizzo’s unscheduled day off was just a precautionary measure (so far), but he said Rizzo wouldn’t even be available off the bench.

Maddon says Rizzo likely to sit out entire game barring “miracle cure,” though it’s a precautionary rest for his back.

Roster Moves: The Cubs have recalled infielder, David Bote; Derek Holland was sent to the IL for a wrist injury. The Cubs have been playing with a short bench since Bote was demoted to Iowa, and now with Rizzo down for an undetermined period, it only made sense for the Cubs to go back to a five-person bench and an eight-man bullpen.

Kemp on uniforms: Cubs second-baseman, Tony Kemp, was asked about the all-white Players’ Weekend uniforms and his reply says it all. I’ve seen only one reader on social media say that he liked them, but beyond that rogue soul, nobody else can seem to stand them… including, apparently, Tony Kemp.

If there’s one good thing that has come out of Players’ Weekend, it has to be the creativity of some of those in the media. Take a look at the uniforms, as Rowan Wick stands to the left of David Bote during the national anthem. You KNOW they planned this…

Cubs plummeting: Just the other day, I wrote that according to Fangraphs, the Cubs had a 79.4% chance of entering the postseason. With back-to-back losses to Washington on Friday and Saturday, coupled with wins by St. Louis and Milwaukee, the Cubs’ chances have now fallen to 68.9%, with the Cardinals right on their heels. Milwaukee still lags in the playoff outlook (22.7% chance of seeing October), but they sit only 2.0 games behind the Cubs in the NL Central standings.

Oh no, Zo: In a season already marred by controversy, injuries, underperformance, drama, and uncertainty, the Cubs will now have to decide what they’ll be doing with Ben Zobrist. His offensive numbers have been terrible in the minors, but they say the call-up is still in line for September first. The expanded rosters will undoubtedly allow some leeway to accommodate Zo, but Theo Epstein has to be wondering at this point, just how much Ben will be able to contribute on the field.

Time for a (multiple) double-take: To further accentuate the point that I made in my commentary about the absurdity of Player’s Weekend, here’s a video from Baseball Quotes’ Twitter page, showing all 30 teams in action this weekend, while hitting bombs. One would think these were all highlights from the same two teams, but not so.

3-AM: After suffering a fractured tibia (shin) several weeks ago, former Cub, Tommy La Stella, is now hitting off a tee and doing a little fielding. Tommy was having the best season of his career, before the injury.

There are only three outs an inning, and they should be treasured. Give one away, and you're making everything harder for yourself. -Earl Weaver pic.twitter.com/EkYlC2xyqb