After a decisive win against Arizona on Wednesday, the Cubs (4-2) returned to Sloan Park this afternoon to take on the Oakland Athletics (1-5). The Cubs would send righty, Kyle Hendricks to the mound for his first appearance of the spring, while the Cubs’ batters would face Oakland southpaw, and former Cub, Brett Anderson.

Not many highlights today, as the Cubs were blown out by a final score of 10-3.

The Professor looked solid in the first, despite giving up a two-out single to Ramon Laureano, Hendricks would escape unharmed while collecting a strikeout along the way.

In the top of the first, a leadoff single by Almora would be wasted when he was picked off of first on a 1-3-6 put-out, and while Zo and Bryant would both make good contact, they’d also be retired.

Hendricks would reemerge for the second inning, again giving up a one-out (infield) single, but he would bail himself out on a pitch that yielded a 5-4-3 (Bryant-Descalso-Rizzo) double-play.

Moving into the bottom of the second, Javy Baez would get the inning started with a single to right. Kyle Schwarber, vowing to be more patient this year, would draw a walk, but Jason Heyward and Daniel Descalso would both go down on strikes, ending the inning without a run.

Brian Duensing would take the mound in third for Chicago, for a three-up, three-down inning that would see good glovework by Bryant on a groundball and great speed by Almora on a pop-up.

The Cubs would hit a couple of hard groundballs in the third, but nothing that would leave the infield, leaving the Cubs retired in order and the game tied at zero.

Brandon Kintzler would get the nod for the top of the fourth and he, too, would send the A’s down in order, tallying a strikeout along the way.

After the Cubs went down in order in the fourth, righty, George Kontos, would take the mound for the Cubs in the fifth, giving up the hits that would break the tie. Although a deep fly ball to Hannemann would fail to score the first run of the game, an ensuing ground ball would give the A’s a 1-0 lead.

In the fifth, a Schwarber double and Heyward single would get things rolling with no one out. Descalso and Davis would give the Cubs their first two outs, but a Hannemann walk and a Ryan Court single would put the Cubs up 2-1.

Jen Ho Tseng would take the mound in the sixth, for what would become a disastrous inning for both him and the Cubs. After giving up three singles, two walks, and a triple, the A’s would find themselves up 6-2 with a runner on third and just one out. A wild pitch would score Oakland’s seventh run before Joe Maddon would emerge from the dugout with relief. Left-hander, Jordan Minch would finish the inning without allowing another run, but not before the

After failing to score again in the sixth, things would get even uglier for Chicago in the top of the seventh. Randy Rosario would start his season by giving up back-to-back solo homers, putting the A’s up 9-2.

A hit-batsman (Field) and a single (Giambrone) would start the seventh inning for the Cubs. Field would advance to third on a fielder’s choice but would be thrown out trying to score after tagging up on a Hannemann flyball to end the inning.

Allen Webster would take the mound in the eighth, and while he should have escaped the inning without allowing a run, shortstop, Cristhian Adames bobbled a ball on what should have been an inning-ending double play, allowing the A’s to score one.

The Cubs would score in the eighth on a Ryan Court double and an Adames single, but that’s all they’d get. A’s 10, Cubs 3.

Lefty Manuel Rondon came in to pitch the ninth, escaping the inning without allowing a run, but the damage was already done.

The Cubs would show signs of life in the ninth but would fail to score again in an ugly 10-3 loss. 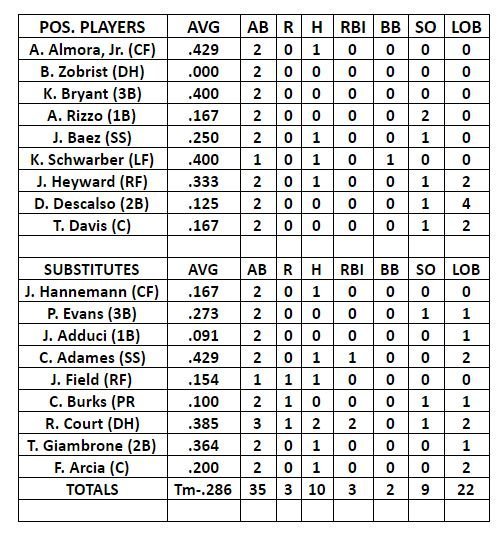 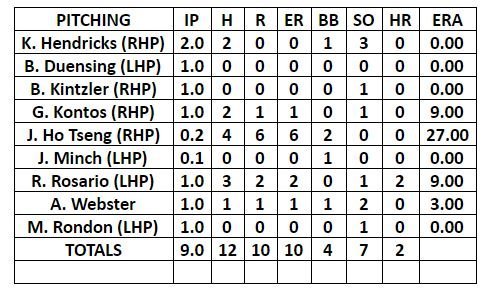