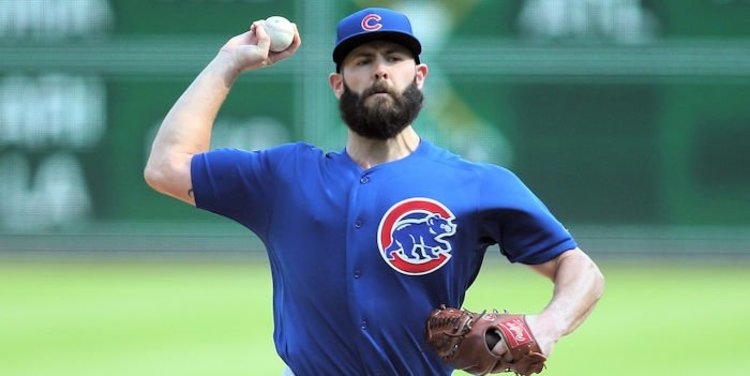 The offseason for the Cubs has been filled with mostly departures and a couple of additions. However, as the roster currently stands, there are some holes that the Cubs need to fill. Despite their recent unwillingness to spend a ton in the free-agent market, there are some moves that Jed Hoyer and company need to make before the season begins.

One of the objectives that have been made clear by the front office thus far is a desire to improve the lineup’s overall contact skill — thus cutting down on the strikeouts and the three true outcome tendencies the Cubs lineup has shown over the past few years. This wish was obviously pushed forward because Kyle Schwarber was non-tendered by the Cubs back in December.

Another glaring hole comes on the starting pitching staff that has lost Yu Darvish, Jon Lester, Tyler Chatwood, Jose Quintana, and Colin Rea since the season’s end. The rotation appears to project with Kyle Hendricks leading the way, newly acquired Zach Davies and Alec Mills in the rotation — with the last two spots up for grabs within the organization or with a cost-effective option outside of the organization.

With Victor Caratini to the Padres and the never-ending Willson Contreras rumors, the Cubs do need catching depth in the organization until highly touted prospect Miguel Amaya is ready for his big league debut. Signing Austin Romine may temporarily defuse that need, however.

In addition to those clear needs for improvement, as it stands at the moment, the Cubs have a pretty thin bench, with little middle infield depth — needing some role players at the bare minimum.

Not to mention the other massive hole on this team, there are only four outfielders listed on the team’s active roster: Ian Happ, Jason Heyward, Joc Pederson, and Philip Ervin.

But what makes filling these holes difficult to do or flat out unlikely is that the Cubs have not shown a willingness to spend over the last few offseasons. In fact, it seems to be a goal of the ownership of the Cubs to slash payroll and stay comfortable below the luxury tax. Otherwise, DJ Lemahieu would be a clear and obvious contact-oriented middle infield piece, George Springer could play any of the three outfield positions and hit at the top of the order, and Trevor Bauer just won the CY Young — but you and me both know that those players were never going to be putting on a Cubs uniform in 2021.

So who are some reasonable options for the Cubs to pursue and potentially acquire that they could afford?

STARTING PITCHING: The Cubs have been linked to multiple veteran starters that they could potentially have competed in an open competition for the fifth rotation spot. Some of those names include former Cubs Jake Arrieta and Jeff Samardzija, Chris Archer, Julio Teheran, and Mike Foltynewicz. The common denominator for these pitchers is that they can bring a veteran impact to a young rotation. They are either coming off of poor or injury-riddled seasons, so their price tags will be significantly cheaper.

SECOND BASE/DEPTH: The Cubs are clearly looking to add a contact-oriented player here. Many fans hoped the answer to be Tommy La Stella, but he has signed with the San Francisco Giants. Another name the Cubs have been linked to is Kolten Wong, former Cardinal second basemen who has not only killed the Cubs but has won consecutive gold gloves in the National League at second base. Bringing back Jason Kipnis for another season is also not off the table.

OUTFIELD: The Cubs have been rumored to be interested in multiple outfielders and finally got their left fielder in Joc Pederson. They probably need another quality and versatile bat off the bench.

We at CubsHQ will continue to monitor the market and report any signings when they occur.