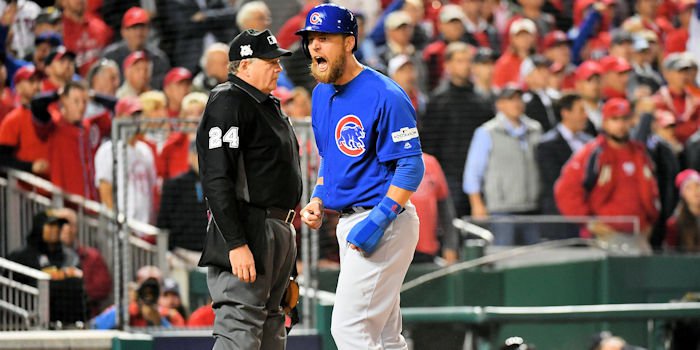 WASHINGTON — For a series that featured spotty pitching for the majority of the five-game slate, a 9-8 slugfest in which a closer was forced to earn a seven-out save seems like the perfect way for it to end, and that is exactly what happened in Game 5 of the competitive NLDS series between the Chicago Cubs and the Washington Nationals. Despite earning five less hits than the Nationals, the Cubs made the most of their scoring opportunities on the evening, riding a clutch 2-4 performance at the plate from shortstop Addison Russell, as well as the aforementioned stellar pitching effort from closer Wade Davis, to victory.

In a contest sporting a plethora of close calls, on-field managerial visits and a rollercoaster of emotions from the Nationals Park crowd, drama was a mainstay. Appropriately, drama came to the forefront from the get-go, with Nats manager Dusty Baker, hoping to avoid losing to his old club, challenging a potential tag-out of Cubs leadoff hitter Jon Jay following the game's first at-bat. Jay, who was called safe on a double, was kept at second following a video review and scored soon after on an RBI groundout to second by first baseman Anthony Rizzo.

However, that 1-0 lead would soon disappear, as Cubs starting pitcher Kyle Hendricks was merely a shell of the man who dominated the Nats in Game 1. Hendricks avoided giving up a run in the bottom half of the first but was bailed out by a laser of a throw from second baseman Javier Baez to out Nationals shortstop Trea Turner at home as he attempted to score from third on a grounder. Lasting just four innings, Hendricks allowed nine hits and four runs in his lackluster pitching stint, coming unglued in a four-run second inning for Washington.

Interestingly enough, the two certified "Cub killers" on the Nationals' roster were responsible for the shellacking of Hendricks, as second baseman Daniel Murphy and center fielder Michael Taylor each hit home runs in the second to put the Nats up 4-1. Murphy, who frequently made mincemeat of Cubs pitchers in the regular season, began the scoring barrage with a solo shot on the first pitch that he saw from Hendricks, sending it to the bleachers beyond right-center. Later in the inning, Taylor, who consistently dominated Cubs pitchers throughout the NLDS, crushed his second multi-run homer in as many days, booming a three-run home run to left-center.

Luckily for Hendricks, his counterpart, Gio Gonzalez, was even shakier on the hill, a theme of the series for him. Gonzalez was left in the game for only three innings, giving up three runs on three hits and four walks. After allowing a leadoff double to Cubs third baseman Kris Bryant in the third, Gonzalez struggled to get out of the inning, walking two batters soon afterward and going on to give up two runs.

With the bases loaded and one out in the third, Russell picked up his first of four RBI on the night with a groundout that scored Bryant. In the ensuing at-bat, Gonzalez gave up another run on a wild pitch that enabled Cubs catcher Willson Contreras to come in to score, cutting the Cubs' deficit to one.

After an uneventful fourth inning, the Cubs produced their most important two-out rally of the season off of arguably the game's best pitcher during the top of the fifth. In a somewhat surprising move, Baker opted to put ace Max Scherzer on the mound in a relief spot. Having pitched 6.1 innings just three days ago, Scherzer appeared to run out of steam as the inning progressed, even after garnering two outs in a mere six pitches.

Contreras incited the rally with a two-out single. Cubs manager Joe Maddon then opted to pinch hit veteran Ben Zobrist in place of youngster Albert Almora, a decision that proved wise. Zobrist came through with a bloop single just beyond shortstop to place runners on first and second and rattle Scherzer. Baker chose to leave Scherzer in the game, though, and the Cubs took advantage. Russell, the thorn in Washington's side on the evening, smacked the first pitch thrown to him by Scherzer down the third-base line for a two-run double, giving the Cubs their first lead since the opening frame.

.@Addison_Russell turned that clutch factor all the way up. #NLDS pic.twitter.com/Nj2iQp6VQI

From there, strangeness ensued, with most of it surrounding Nats catcher Matt Wieters. Wieters appeared to crouch fairly close behind home plate during the next two at-bats, leading to two controversial plays regarding interference calls, or a lack thereof. The first came on what Wieters felt was batter's interference by Cubs second baseman Javier Baez, who unintentionally hit Wieters's mask on his backswing, culminating in a passed ball on a strikeout that led to a rushed throw from Wieters. The throwing error resulted in Russell scoring and Baez advancing to second on what was ultimately considered a dropped third strike.

Despite complaining to the umpire about the backswing of Baez striking his mask, Wieters came up empty-handed with his pleas, as the Cubs took a 6-4 lead nonetheless. Next, Wieters himself was penalized for catcher's interference on the swing of Cubs hitter Tommy La Stella, putting La Stella on first to load the bases. Still manning the rubber at that point, Scherzer then hit Jay with a pitch to force home a run. The reigning Cy Young winner finally escaped the inning in the succeeding at-bat, but substantial damage had already been done.

Scherzer ultimately set the tone for shoddy relief pitching that the second half of the game featured, as a combined six runs were plated in the final four innings. The Cubs increased their lead in the top of the sixth, benefiting once again from Russell's great performance, as the middle infielder came through on a line-drive double to center that scored Zobrist.

However, the Nats procured two runs in the bottom half of the sixth via a two-out rally, taking advantage of the middle-relief struggles that plagued the Cubs off and on over the course of the series. After Chicago reliever Pedro Strop walked left fielder Jayson Werth to put one man on with two outs, Maddon replaced him with Mike Montgomery, who proceeded to give up two doubles and throw a detrimental wild pitch.

First, Nats slugger Bryce Harper clubbed a double to right that put runners on second and third. Then, Montgomery threw a wild pitch on a ball four to first baseman Ryan Zimmerman, allowing Werth to score. After that, plus a mound visit from Cubs pitching coach Chris Bosio that clearly did not help, Montgomery was taken deep on a double to the warning track in left field by Murphy, who went 2-3 with two RBI and one walk.

Following the double by Murphy, the Nats trailed 8-6, but the Cubs gained a run back in the top of the seventh on yet another controversial play. With an RBI groundout, Bryant earned his lone RBI of the game, as he beat out a throw from Murphy to prevent an inning-ending double play. But the play was reviewed for potential slide interference, as Jay's slide into second was close to violating the "Chase Utley Rule." However, Jay escaped video replay unscathed for the second time on the night, and the play was upheld.

The Nats neutralized that run in the bottom half of the inning, though, scoring a run off of Jose Quintana. Like Scherzer, starting pitcher Quintana entered in a relief appearance, coming in after recently-maligned reliever Carl Edwards, Jr., was quickly taken out upon walking the leadoff batter, Taylor. Quintana struggled to settle into a groove during his appearance, ultimately giving up a run on a sacrifice fly by Harper that scored Taylor before Davis was brought in to get the Cubs out of the jam.

From there, Davis kept the Nationals at bay, working through a grueling eighth inning that saw Washington score one run on an RBI single from Taylor that brought in Murphy. Two quality defensive plays helped Davis's cause in the eighth. For starters, Russell pulled off a pivotal double play with runners on first and second and nobody out the ease the pressure, and, to end the inning, Contreras picked off Nats outfielder Jose Lobaton at first, thanks to video review. Replay confirmed that Rizzo indeed tagged Lobaton's foot as it popped up off of the bag on his slide back to first, thus ending the inning and leaving two runners stranded for Washington.

Davis then flipped the script in the ninth, finally producing some quality relief pitching to close out the game, as well as the series, with a three up, three down ninth inning that saw him strike Harper out swinging to end the game and send the Chicago Cubs to the NLCS for the third consecutive season.

"It was a lot at first," Davis said when speaking on his lengthy outing after the game, "but I started to get a little tired towards the end. Willson (Contreras), with that pick-off play, was definitely uplifting."

Davis also added when discussing the Nationals, "That's a good team over there, a first-class team. And to come out with a win is really big."

Davis collected his third save of the series, and arguably the most incredible save of his career, in grand fashion. Combining with fellow Chicago reliever Brien Duensing, who picked up the win for a brief, yet successful, 0.2-inning stint, Davis brought stability to the unpredictability that defined the Chicago bullpen for most of the series. Scherzer, as part of a rather unfortunate ending to his marvelous 2017 season, collected the loss for his appearance out of the bullpen that will surely haunt both him and Baker for the entirety of the offseason.

Coming on the five-year anniversary of the Nats blowing a six-run lead in a loss to the St. Louis Cardinals in Game 5 of the 2012 NLDS, Washington dropped to 0-5 all-time in playoff series, dating back to the franchise's days as the Montreal Expos.

As for the North Siders, with the clutch, come-from-behind victory on the road in the fifth and final game of the NLDS, the Cubs punched their tickets to the NLCS for the third straight year, setting up a rematch against the Los Angeles Dodgers with a return trip to the World Series on the line.