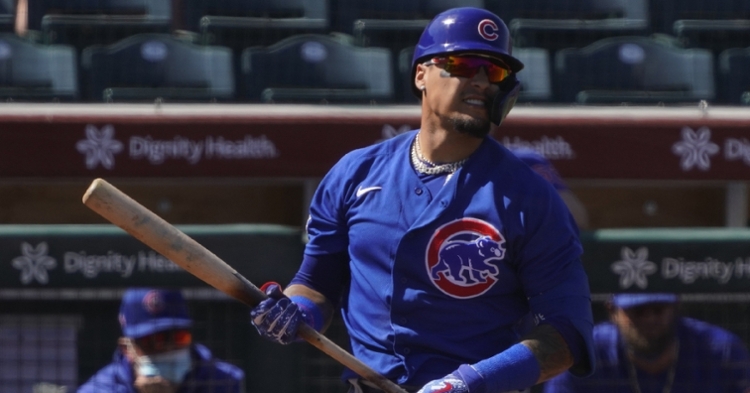 For the first time this spring, the Cubs offense was stymied. Of course, it had to be the Brewers as the ones responsible for it but give credit where credit is due. Despite lots of traffic on the bases early on, starter Brandon Woodruff was able to wiggle his way out for no damage yielding way to the Brewers pen.

Opposing him on the Cubs side of things was Jake Arrieta making his second start of the spring. At this point in Arrieta's career, spring isn't about results more so than getting his work in. Despite allowing 2 ER runs on three hits with three walks, Arrieta lasted until the fourth inning topping 50 pitches in his outing. Two of his three walks came against Christian Yelich as he approached that at-bat like a regular-season game.

Early on, the Cubs had their chance to grab an early lead, with Ian Happ leading off the first with a sharp single to left. Javier Baez followed that up with what looked to be a broken-bat infield single, but a great play from Orlando Arcia erased Happ at second even though he was safe on the play. A bunt single from Joc Pederson ahead of an Arcia error gave the Cubs a bases-loaded situation with one out. Unfortunately, Jason Heyward grounded into a double play ending the would-be threat.

The same thing can be said for the second inning where both David Bote and Matt Duffy picked up singles, but the Cubs were unable to cash in once again. Unlike the Cubs, Milwaukee wasn't going to let a scoring chance go to waste, Keston Huira picking up an RBI double followed by a Dan Vogelbach single to make things 2-0. A fifth-inning homer from Dylan Cozens extended the lead to 3-0, but it was the sixth inning when Milwaukee busted things wide open.

With Craig Kimbrel now relieving Keegan Thompson, the righty was hoping for better fortunes in his third outing this spring. Instead, Kimbrel allowed not one but five hits, including a bases-clearing triple from Jace Peterson and a two-run homer by former Cubs prospect Billy McKinney to build an 8-0 lead.

Jace Peterson cleared the bases with a three-run triple off Craig Kimbrel in the 6th.

Kimbrel now has a 30.25 ERA as his rough spring continues.

With Joe Biagini and Juan Gamez holding the Brewers scoreless across the final inning plus, the Cubs offense finally began to show some life signs. After an RBI triple from Alfonso Rivas ended the shutout bid in the sixth, the Cubs looked to make even more noise in the seventh. A lead-off Ian Miller single gave the Cubs a speedster on the bases as he advanced to second on an error.

After an Abiatal Avelino single to left to load the bases, Rafael Ortega kept the line moving with an RBI single as his great spring continues. Following an Ilderamo Vargas lineout, Tyler Payne picked up his first RBI of the spring with a walk making things 8-3. With Rivas at the plate, one big hit could make things interesting, but it was a called third strike that ended the game with the Cubs falling 8-3.

The ERA of 30.25: 30.25, no, I don't mean the Cubs are 30-25, but that is Kimbrel's ERA through three spring outings. Spring Training or not, this is a concerning sight for Cubs fans to witness, especially when you look at his track record with this team. After struggling most of the first few weeks in 2020, Kimbrel lost the closer's job to Jeremy Jeffress and was forced to work in low leverage situations.

As the season went on, Kimbrel not only improved but started to look like his old self. His velocity was back in the 98 MPH range, his command was where it needed to be, and he wasn't giving up hits. Those improvements gave manager David Ross the nod of approval he needed to name Kimbrel the closer for this season.

At this point, you must wonder if he is second-guessing that decision considering how Kimbrel is performing this spring. Not only has he looked terrible but he is flat out getting hammered, which is never a good sign. Hopefully, he works out the kinks and gets ready for the regular season.

More room at Cubs camp: Before the game yesterday, the Cubs announced 22 roster cuts, trimming their camp roster from 73 to 51. Expect more in the coming weeks as teams will start getting their regular season crew in place. After having to sort through so many names to try and get at-bats, things will be a bit easier with so many players optioned.

Most of those players are prospects and shouldn't be surprised, but it was nice to see some of them in camp. Guys like Tyson Miller and Cory Abbott are heading to AAA Iowa, Miguel Amaya is off to AA Tennessee, and Chase Strump and Brennan Davis appear ticketed for South Bend. With Brailyn Marquez continuing to be slowed by COVID, expect him to and in South Bend too.

Quantity, not quality: As much as I want to see pitchers use their entire arsenal in Spring, that is not the case for Arrieta. Coming off elbow surgery, Arrieta is out to prove he still has something left in the tank. With this being his 12th year in the league, Arrieta is at that point in his career where Spring Training means nothing.

He knows his place on this roster and knows precisely where he can contribute if healthy. This is the time at camp where he is just trying to get in shape and is looking to get as many innings in as possible no matter what the results be. If Arrieta is happy with where things are come April 1st, Cubs fans should be too.

Cubs starter Jake Arrieta, on his latest outing. Built up to 55 pitches and worked with some traffic, while continuing to focus on mechanical adjustments. pic.twitter.com/1wxRZPQk4q