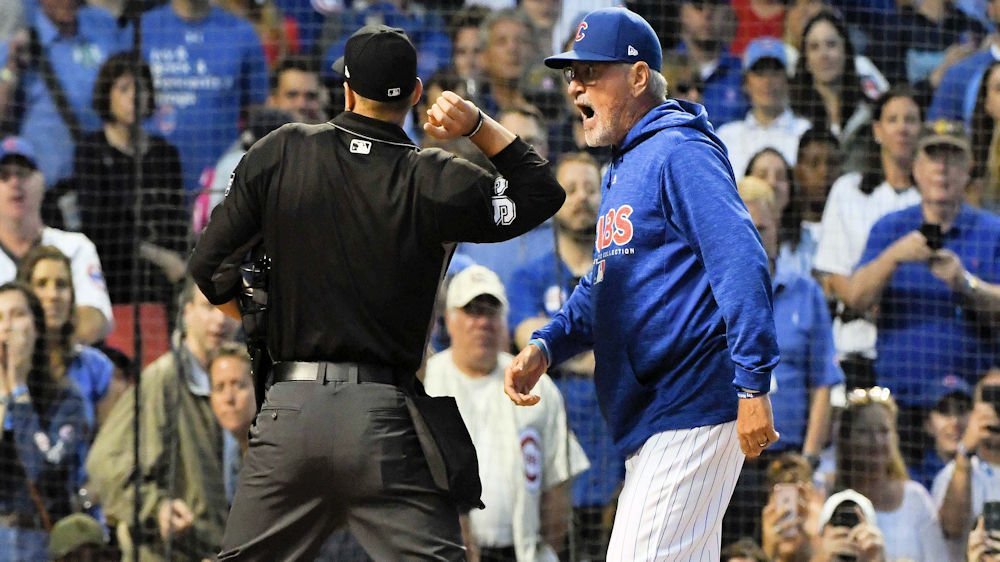 CHICAGO — Unfortunately for the Chicago Cubs, they had to play the final three innings in the night game of Saturday's doubleheader with the St. Louis Cardinals without the services of star second baseman Javier Baez, as well as manager Joe Maddon. Fortunately for the Chicago Cubs, the mid-game ejections of Baez and Maddon lit a fire under them and led to a critical three-run sixth inning. However, in a game that featured a critical three-run inning by each team, the Cardinals put together a late run to overcome a 3-2 deficit and win 6-3 in the fourth game of a five-game set.

Baez and Maddon were thrown out by home-plate umpire Will Little after Baez argued a controversial checked-swing call on the final out of the fifth frame and Maddon defended him. With runners on second and third and two outs, Baez was called out on a checked-swing third strike, in which Little opted not to defer to the first-base umpire and instead ruled Baez out himself. Baez, who did not appear to go around on the checked swing, was frustrated that Little did not ask the first-base umpire to provide his ruling, which is customary in those situations, and he threw his bat and helmet in disgust after getting rung up.

Little did not take kindly to Baez's emotional display, so he sent him to the showers early. Maddon then jolted out of the dugout to confront Little over the call. Maddon even appeared to tell Little to throw him out because he was so disgusted with the strikeout call. Up to that point, the Cubs had struggled at the plate, with the exception of first baseman Anthony Rizzo, who hit leadoff for the fourth straight game. Rizzo was the lone spark for the Cubs early on, but the controversial ejections incited Chicago.

The Cardinals struck first with an opening-inning run against Cubs starting pitcher Mike Montgomery. Montgomery gave up back-to-back singles to start the game and then allowed what turned out to be the sole run scored against him on the night when Cardinals shortstop Paul DeJong hit a sacrifice fly to left. Montgomery was taken for five hits and two walks while striking out three in six innings on the hill. Cardinals starting hurler John Gant put in five innings of scoreless work, in which he allowed four hits and three walks and struck out two.

The vast majority of the offensive excitement came with relievers on the mound. The Cubs scored three runs against Cardinals relief pitchers Greg Holland and Jordan Hicks in the sixth, with all three runs getting charged to Holland. Not helping matters for the St. Louis pitchers was an egregious fielding error committed by DeJong.

With Holland pitching and runners on first and second base with one out, DeJong misplayed a grounder hit by Cubs shortstop Addison Russell. Thereafter, Tommy La Stella drew a walk on four straight pitches. During the at-bat, Kyle Schwarber nearly decided to come home from third on a wild pitch but hesitated and remained at third base. It proved to be a moot point, as the walk of La Stella came with the bases loaded and scored Schwarber.

Hicks entered the game after that and gave up an infield single hit to shortstop by Rizzo. Rizzo nearly accrued the first five-hit game of his career, finishing 4-5 with one RBI in the leadoff spot. Following Rizzo's infield hit, Kris Bryant brought Russell home on a fielder's choice grounder. The Cubs used small ball throughout the contest, benefiting from the Cardinals' defensive mistakes and the seven walks issued to them.

Hitting was at a premium for both teams throughout most of Saturday night's matchup. There were just three extra-base hits accrued overall, and all three of them were garnered by the Cardinals in the last three frames. The first one came when, in the top of the seventh, hot-hitting Cardinals first baseman Matt Carpenter slugged a solo home run to right-center off Randy Rosario. Currently in the midst of the best series of his career, Carpenter has now homered six times through the first four games of the five-game set. That is the most home runs ever hit by a single player in a series at Wrigley Field. Carpenter has also hit a long ball in six straight games, which is a Cardinals franchise record that Carpenter shares with power-hitting legend Mark McGwire.

Cubs reliever Pedro Strop allowed the Cardinals to tie the game in the eighth, with St. Louis producing a two-out rally. After Tommy Pham collected a two-out single, Strop walked Yadier Molina. Strop was visited on the mound because he showed signs of discomfort after fielding a comebacker and running to first base for an unassisted out. Strop remained in the game, though, and the Cubs paid the price, as he gave up the lead on an RBI single by Yairo Munoz.

The Cardinals went on to take control in the top of the ninth. Justin Wilson began the inning on the bump for Chicago and gave up two consecutive walks to start the inning. Steve Cishek was next brought on to relieve Wilson. In Cishek's first at-bat, Rizzo made a great defensive play by charging a bunt and firing to third base to out the lead runner. However, soon afterward, DeJong made up for his aforementioned error with an RBI double that fell in safely near the left-field line.

Leading 4-3 at that point, the Cardinals attained some breathing room a few at-bats later on a two-run double to deep right by Pham. The Cardinals finished with 10 total hits, which was three more than the Cubs obtained. Rizzo was responsible for over half of the Cubs' hits. He also reached base four times in the afternoon installment of the doubleheader, making him the first Cub to reach base four times in both games of a doubleheader since the great Ryne Sandberg did it against the Cardinals in 1992.

Cardinals closer Bud Norris finished off the Cubs in the bottom of the ninth for his 18th save. Heyward hit a leadoff single but was left stranded, as Willson Contreras grounded into a double play to end the game. Falling to the Cardinals (50-48) by a final score of 6-3, the Cubs (57-40) left 14 runners stranded on the evening and were unable to capitalize on their sixth-inning turnaround. Wilson received the loss to fall to 3-3 overall, and Cardinals reliever Sam Tuivailala, who pitched a scoreless eighth, collected the win, making him 2-3 on the season.