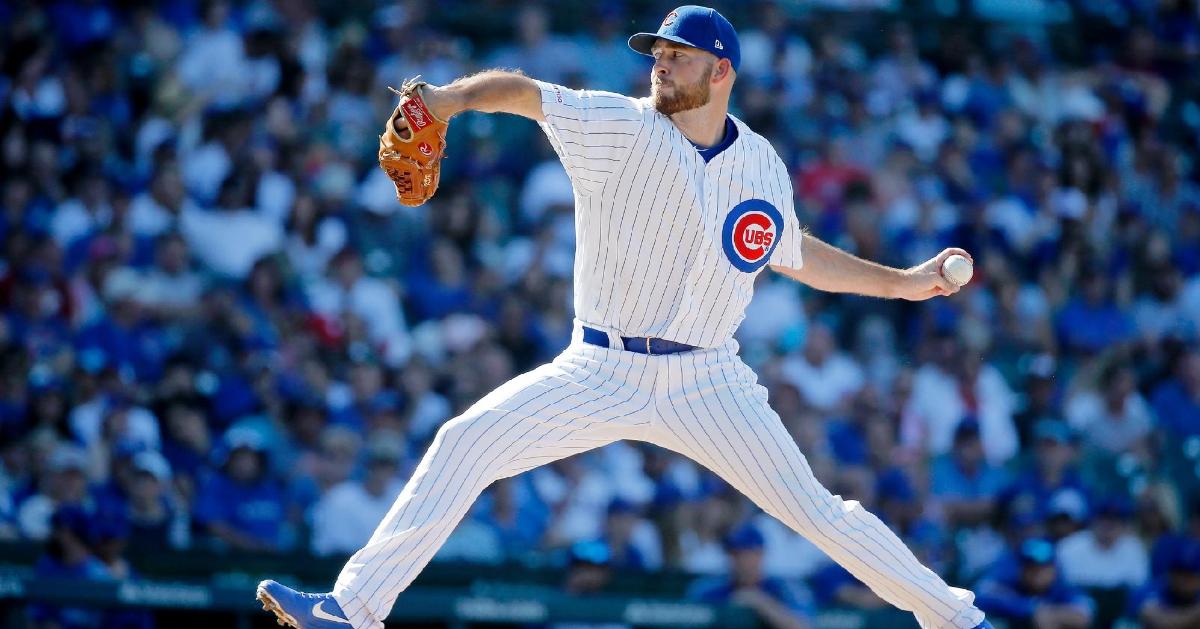 Kyle Ryan was one of three Cubs relievers to excel on the mound in the North Siders' win against the Brewers. (Credit: Jon Durr-USA TODAY Sports)

CHICAGO — Returning home following a shaky 3-6 road trip, the Chicago Cubs (58-51) kicked off a 6-game homestand in winning fashion by downing the rival Milwaukee Brewers (57-54) at Wrigley Field. Winning the contest at Wrigley Field on Friday afternoon, the Cubs never trailed and, despite going 4-for-13 with runners in scoring position and leaving 13 men stranded on base, came up with enough clutch hits to pull out a fairly comfortable 6-2 victory.

The Cubs got off to an auspicious start at the plate, with leadoff hitter Jason Heyward smacking a home run in the Cubs' first at-bat of the game. The 382-foot blast hit out to center field provided the Cubs with an early 1-0 advantage. The Brewers quickly responded, however, with veteran slugger Ryan Braun taking Cubs starter Jose Quintana deep on a solo shot in the top of the second to even the score. In the bottom of the third, though, the Cubs regained the lead by way of a 2-run bomb, as Javier Baez skied a 376-footer over the wall in left field.

Ryan Braun & Wrigley. It's a tale as old as time. #ThisIsMyCrew pic.twitter.com/rQ6Ipt1xHD

Plating three runs on five hits in the third frame, the Cubs went up 4-1 off Brewers starter Zach Davies, who lasted just four innings on the mound. With two outs and runners on the corners, Quintana tacked on an insurance run to help his cause by slapping an opposite-field RBI single. On the bump, Quintana performed well, as he struck out five and gave up only two runs in six innings of work. Chicago increased its lead to four runs in the fifth, with Baez notching a leadoff double and eventually coming home on a ground ball.

Baez went 3-for-5 with two runs scored and three RBI on the day, and he continued to wreak havoc on the Brew Crew in the sixth. Marking his first hit at the Friendly Confines as a member of the North Siders, newly acquired Cubs right fielder Nicholas Castellanos hit a bloop double to start off the bottom of the sixth. A few at-bats later, with baserunners on first and second, Baez recorded his third RBI with a fielder's-choice groundout. Castellanos crossed the plate, thus providing the Cubs with a 6-1 lead, and Baez hustled to reach base. "El Mago" then stole second and reached third on the play due to a throwing error committed by Brewers catcher Manny Pina.

Unfortunately for Baez, the Cubs were unable to bring him home in the bottom of the sixth, and in the bottom of the seventh, three Cubs were left deserted on the basepaths when Anthony Rizzo struck out swinging with the bases loaded to end the inning. The Cubs' bullpen kept the Brewers at bay and prevented the missed opportunities from coming back to bite Chicago. After Quintana was taken out with two on and nobody out in the top of the seventh, Cubs reliever Rowan Wick proceeded to collect three outs in three consecutive plate appearances, with the Brewers scoring just one run via an RBI groundout.

Brandon Kintzler relieved Wick in the eighth and sat the Brewers down in order. Kintzler was ordered by the home-plate umpire to change his glove during the course of the inning because the light color of the glove was considered distracting, but that did not faze Kintzler in a frame that saw him strike reigning National League MVP Christian Yelich out on three pitches. Kyle Ryan was the final Cubs pitcher to toe the rubber, as he put the finishing touches on the 6-2 triumph in the top of the ninth.