The Cubs managed an insane, come from behind win on Saturday for their first win in three games against the Dodgers, with last night being the finale. Lefty, Jose Quintana (4-6, 3.89 ERA) pitching against Dodgers’ ace lefty, Hyun-Jin Ryu (9-1, 1.36 ERA).

From the get-go, I didn’t see this one going the Cubs’ way, as Ryu has been impossible to stop. He walks nobody and strikes out the vast majority of batters that he faces, which is why I felt the Cubs needed to win against Buehler and Hill if they wanted to settle for a 2-2 series split.

After two quick outs in the first, Q seemed to get a little apprehensive about challenging the Dodgers the batting order, and he paid the price for it. After a series of pitches that missed the zone, he walked the bases full, then walked a run home- not a good idea when facing Ryu. Quintana buckled down after the first, holding the Dodgers to their 1-0 lead until the sixth.

For the first five frames, the Cubs pecked at Ryu, but couldn’t get a runner past second base which isn’t surprising, as Ryu has held teams to a .037 batting average (2 for 54) with runners in scoring position, going into last night. That all changed in the top of the sixth.

Javier Baez hit a soft infield single. After Anthony Rizzo lined out to short, Kris Bryant’s bloop single moved Javy to third. Willson Contreras joined the party with an infield single of his own, scoring Baez and moving KB to third. David Bote’s sac-fly scored Bryant, putting the Cubs up 2-1 by the time the inning ended.

The lead was short-lived, as Quintana gave up a homerun-ball to tie it, then a double and a single, ending his day. Brandon Kintzler and Tim Collins combined to limit the damage to the tying run (given up by Q).

The Dodgers would grab the go-ahead run in the eighth off of the Steve Cishek, AND although the Cubs threatened in the ninth, there’d be no late inning heroics. Final score: Dodgers-2; Cubs-1, as the Cubs lose the series 3-1, and end an abysmal 2-5 road trip.

Today’s question: Who is currently the weakest link in the Cubs’ bullpen?

Craig Kimbrel: He’s getting closer, Cubs’ fans. Kimbrel departed the Cubs complex in Arizona yesterday and headed to Sacramento, to meet up with the Iowa Cubs. He’ll make his first appearance for the I-Cubs on Tuesday.

Theo Epstein: "We can't keep on making up for our road trips with great homestands. We have to find a way to get into a rhythm on the road as well."

Cocky is coming to Wrigley: The White Sox Lucas Giolito, threw a pitch up and into the Yankees’ Luke Voit on Saturday night. Voit called it “BS,” to which Giolito, unapologetically replied, “That’s how I pitch if you don’t like it, that is your problem.” Giolito is due to face the Cubs at Wrigley this week, and I hope the Cubs smash this guy.

MVP play: There were a few good defensive plays in the Cubs/Dodgers game on Saturday night, but nothing, and I mean NOTHING, compared to this one…

The @Dodgers ball girl just made a SNAG. 101 mph exit velocity and made it look effortless ?? #SportsCenterTop10 pic.twitter.com/bU17Ph6zhE

Yu Darvish: After pitching what was unarguably his best start as a Cub on Saturday night in Los Angeles, Yu Darvish feels that he has reconciled with himself over losing Game-7 for the Dodgers in the 2017 World Series. "This was really important in my life," Darvish said. "I think now I can move forward. I pitched good here."

Dodgers’ starter, Walker Buehler, said, “Darvish, being back here, it was cool for us. We all like him. I get where the fans are coming from, but at the same time, he’s a good guy, and it was fun pitching against him.”

Kintzler is hilarious: Want something to do for the next 12 minutes and 26 seconds? Do yourselves a favor and listen to Kelly Krull's interview with Brandon Kintzler (there’s a podcast in the article). Kintzler talks about a ton of stuff and his takes are priceless. Although I’ve been told he had a sense of humor, he’s always struck me as a guy with a very dry sense of humor, and I couldn’t have been any more wrong.

Is Adbert Alzolay coming? The rumors are starting to swirl, that in the absence of an injured Kyle Hendricks, the Cubs may make a phone call to Iowa to have RHP Adbert Alzolay sent up.

According to an article written by MLB Trade Rumors, the Cubs may be planning to rest each of the starters, by using a few different spot starters; namely Tyler Chatwood, Mike Montgomery and Adbert Alzolay.

Theo Epstein: “Alzolay is on a real roll at Triple-A, and we’d been planning even before this to possibly give him a couple of spot starts at some point over the next month or so,” Epstein said. “Just to get his feet wet and also give our veteran rotation guys a little bit of a breather during a stretch in the schedule where we don’t have a lot of off days.”

Chatwood eager: I had no doubt that Tyler Chatwood wanted to fill in for Kyle Hendricks, and I believe that he should. ESPN’s Jesse Rogers asked Chatty about it:

Talked to Tyler Chatwood today. He would like to start for Hendricks, obviously, and admits its something to get used to, going from the bullpen to starting, etc. Maddon said they'll announce something after the off day tomorrow.

Baseball quotes: “A positive attitude causes a chain reaction of positive thoughts, events, and outcomes. It is a catalyst, and it sparks extraordinary results.” -Wade Boggs

Mets: This seems to be a yearly thing with the Mets, as rumors begin to swirl about their starters being on the trading block. This time, it’s righty, Zack Wheeler, who’s drawing interest. The 29-year-old Wheeler is in his final season of team control, in which he’s making a reasonable $5.975MM.

Mariners: After starting the year 13-2, the Mariners have fallen to a record of just 30-44 and have put themselves out of contention, as they are 19.5 games back in the AL West. After trading Encarnacion to the Yankees on Saturday, it is now rumored that owner, John Stanton, is looking to slash payroll and wants Jerry Dipoto to deal anybody who’s making good money. 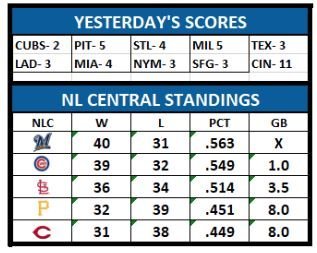