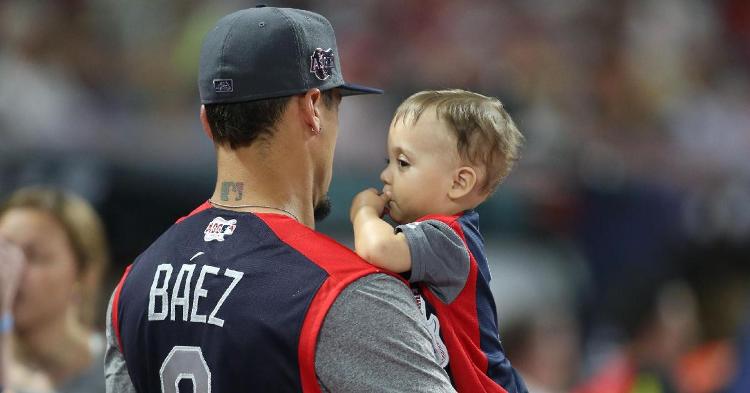 Cubs/Pirates Probable Pitchers We’ve hit the much needed All-Star break, with the AS Game to be played, Tuesday, July 9, 2019, at 6:30 PM Central.

Leave your troubles behind: The Cubs will represent the NL All-Stars in three different ways this year, with Willson Contreras catching, Kris Bryant at third and Javier Baez at short. This says so much for a team who’s struggled so badly this season…

#ElMago is batting 2nd and ready to put on a show! pic.twitter.com/Bh9eskzxOV

The Cubs All-Star selections are headed to Cleveland! Kris Bryant, Javier Baez, Wilson Contreras, and company are all smiles. pic.twitter.com/6KGf8fP2DO

We'd like to officially predict Vlad Jr. will win the HR Derby.

It took 4 1/2 minutes, then 60 seconds, then a pair of three-swing bonus rounds, but Vladimir Guerrero Jr. prevails over Joc Pederson in the Home Run Derby seminfinals, 40-39.

Thank you for a moment we won't forget. #HRDerby pic.twitter.com/af4glEuxfM

How does Peralta sound? Teams now have just 22 days to complete all trades, as the rules have changed this year, to a single deadline (July 31), and the Cubs are now reported to be showing interest in D-Backs’ outfielder, David Peralta. It’s unclear yet, whether Arizona will sell, but speculation says they may. Peralta just hit the 10-day IL with shoulder inflammation, but they do expect the slugger to return healthy, before the deadline. Peralta is slashing .289/.352/.476, with an OPS of .828, nine homers, and 44 RBI.

Mike Trout on Javy: You know the Cubs have a pretty good guy in Javy when even Mr. Trout says he the one to watch. Tell ‘em, Mike-

These are all great points you make, @MikeTrout.

More from your All-Stars: The All-Star game means something different to every player who takes the field. Here’s KB’s and Willy’s takes:

Dee Gordon? There are rumors and rumblings that things aren’t going well for Dee Gordon in Seattle, and some speculate that he may fit in with the Cubs. Gordon is owed $20M for his contract that ends in 2021, so it’s unlikely that the Cubs would strike any deal which would cause them to assume the total salary, but Jerry Dipoto is a guy who likes to make things happen, and Theo’s always willing to listen.

The Big Hurt: Frank Thomas says that KB’s remark about not being able to pinpoint what the Cubs can do to improve offensively, signals trouble. "It's just letting me know that there's a disconnect in that clubhouse, somewhere," Thomas said. "And you've got to find it because this team is built to win a World Series this year.”

They call him El Mago: If you’ve never read a subtitled video in your life, read this one, as Javy explains his life of baseball.

Francisco Lindor and Javy: It would require El Mago moving back to second base, but boy, what I wouldn’t do to see both of these guys in a Cubs uniform.

Mad-Bum to the enemy: While the Cubs look to shore up their pitching, rumors say the Brewers and Madison Bumgarner are engaging in talks.

Baseball Quotes: “How to hit home runs: I swing as hard as I can, and I try to swing right through the ball. The harder you grip the bat, the more you can swing it through the ball, and the farther the ball will go. I swing big, with everything I've got. I hit big, or I miss big.” -Babe Ruth