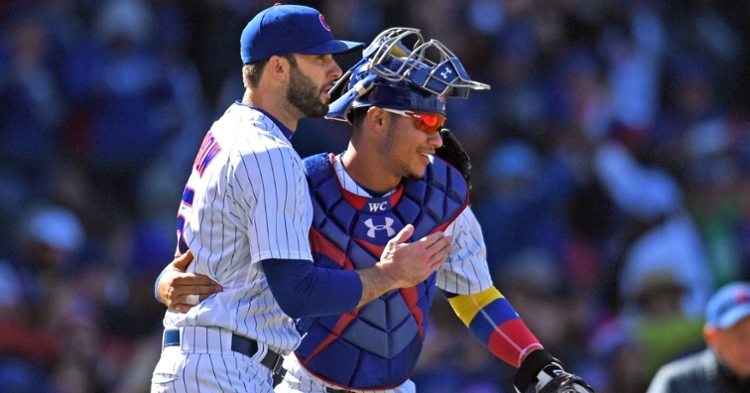 Brandon Morrow: The Cubs have agreed to terms with Brandon Morrow on a minor league pact. Morrow says his arm feels great, but he has not pitched since before the All-Star break in 2018. It is a one-year minor league deal with a salary of $1 million if he makes the MLB roster plus 1.25 million in incentives if he pitches in 65 games. A risky move, in my opinion.

According to ESPN's Jesse Rogers, Morrow is 'full go' for spring training according to his source.

Brandon Morrow has agreed to a Minor League contract with the Cubs. A no-risk, high-reward move for Chicago, and a chance for Morrow to re-establish himself after two tough years.@ESPNChiCubs was first on the agreement.

Yu Darvish: While no specific trade offer has been mentioned, Theo Epstein received inquiries about the availability of Yu Darvish before the meetings ended. Darvish is still owed $81M over the next four years, but I can’t see the Cubs offloading him at this point.

With Cole Hamels’ spot still vacant and the reality that both Jon Lester and Jose Quintana become free agents next winter, the Cubs can ill-afford to let Darvish go at this point, especially knowing there’s a chance for him to come back as hot as he was in the second half.

The good news is that according to some media sources, Yu has a full no-trade clause for 2020, despite previous reports that he could only block trades to a dozen teams.

Every single day of this offseason reading through these godforsaken Cubs trade rumors pic.twitter.com/KW2VD7NqyF

Rule 5 Draft: While Theo selected righty, Trevor Megill from the Padres in the Rule 5 Draft, the Cubs lost a pair of players.

Two former @smokiesbaseball were selected in the Rule-5 draft today. RHP Michael Rucker (BAL) & IF Vimael Machin (A’s from PHI) Rucker has electric ?? stuff at times but battled w/ results at times. His FB stays mid 90’s & breaking ball has major bite. He will pitch in the MLB

The Cubs may be momentarily stalled, but they aren’t dead in the water. Relying on trades to accomplish your agenda tends to rely on patience – especially while top-tier free agents remain unsigned.

Hoyer on Ross: Jed says Rossy can hold guys accountable, but also do it in a way that they’ll still love him. Hoyer says people “inherently trust” Ross and know that doing what’s best for everyone is essential.

What will @D_Ross3 bring to the @Cubs dugout?

Cub Concerts: For those near Wrigleyville, the Cubs have announced that Maroon 5 will be making their summer concert debut in 2020.

Maroon 5 will make their performance debut at Wrigley Field this summer!

Baseball Quotes: “It's supposed to be fun, the man says, 'Play Ball' not 'Work Ball' you know.” -Willie Stargell

Baseball is littered with obstacles. You have to learn how to overcome them to be successful. -Dave Winfield pic.twitter.com/Q2RhtrerA1

Brewers: The Brewers have brought back RHP Corey Knebel on a one-year/$5.125M deal. The team has also announced that they’ve signed LHP Brett Anderson.

Free agent LHP Brett Anderson has officially been signed to a 1-year contract. Anderson went 13-9 with a 3.89 ERA in 31 starts with Oakland in 2019. His 13 wins marked a career high. pic.twitter.com/A8dBDLQt60

Cardinals: The Cards met with Scott Boras this week, regarding Keuchel and Ryu. The Cards are also showing interest in David Price.

Merry Christmas, Mom: I love my mother to death – and she did quit smoking – but Ken’s not going anywhere near this far unless he hits the lottery. Even then, what in the hell would my 75-year-old mom need with a Mas? Merry Christmas, Mrs. Donaldson – congrats.

Josh Donaldson told his mom if she quit smoking he'd get her a Maserati ...

Astros: Lance McCullers and the Astros have settled McCullers arbitration case for $4.1M – the same salary that he had last year.