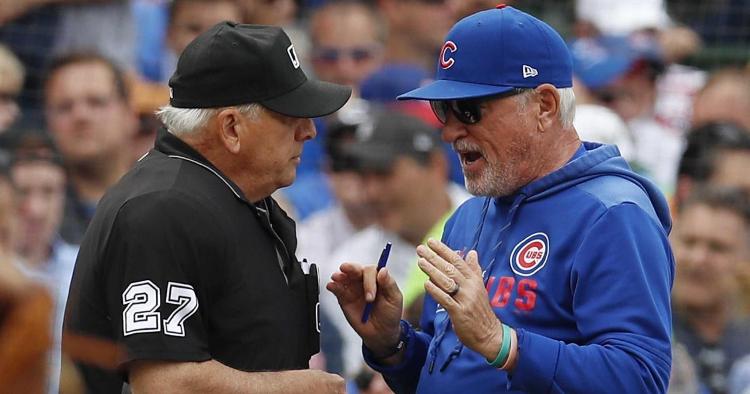 If you were a non-partisan fan who just happened to wind up in the stands at Wrigley yesterday, this was a pretty good game, as the teams fought back and forth throughout. For the Cubs and their fans, however, it was a frustrating loss in a game which could have (and should have) been easily won.

Darvish gave up a run in the second, but the Cubs battled right back, first overcoming the deficit, and then taking a one-run lead on Darvish’s solid, RBI single to the right. The Mets would retake the lead in the third, when Darvish coughed up a gopher-ball to McNeil with a man on, putting the Mets up 3-2.

Addison Russell to the rescue in the fifth, delivering a two-run smash to the left (his 5th of the year) to put the Cubs up 4-3, but Michael Conforto would answer in the sixth with a solo shot to tie things up at 4-4.

Into the seventh and Joe Maddon makes the fatal decision to bring in Brad Brach, who promptly gave up a hit which would end up being the winning run, after his replacement, Mike Montgomery, allowed an RBI hit. Final score: Mets-5; Cubs-4.

Yu Darvish Talk about not being able to catch a break, Darvish has now gone 10-straight outings without a decision, and still hasn’t won in Wrigley Field.

Why Brach? At this point, I have no idea why Maddon insists on going to Brach, especially in tight situations. His ERA was 6.18 when he entered the game yesterday (even worse before it was over), yet somehow, he’s in there day after day, very seldom with positive results. My dad used to have a saying which Joe Maddon would probably benefit from if he only kept it in mind. He always said, “The best thing about beating your head against a brick wall, is that it feels really damn good when you finally stop.” Please Theo, can the Cubs just move on from Brach?

Anthony Rizzo: Very seldom do you see Anthony Rizzo make a mistake, but he had a doozy yesterday. Just as the Cubs started to rally in the eighth (with two out), Rizzo stood on first base, after singling. Willson Contreras hit a little Texas-Leaguer that fell into shallow left, and rather to anchor himself securely at second, Rizz elected to break for third, then abruptly stop, getting himself caught right in the middle of the two bases, becoming dead-meat after a short run down.

Cubs reaction to Alzolay: Alzolay’s new teammates were impressed with the rookie on Thursday night. After he the jotters settled down, Alzolay looked commanding on the hill, eager to hurl pitch after pitch. Here’s how the clubhouse felt.

After the game, Alzolay went back to his hotel and said he had to remind himself it wasn't all a dream.

"He was the happiest pitcher on the face of the Earth."

Tyler Chatwood’s mind-games Even when he couldn’t throw a strike last year to save his life, I never argued that Tyler Chatwood wasn’t a good ballplayer in every other aspect of the game. He fields well, bats like a DH, bunts better than anyone on the team and is smart on the basepaths. Chatwood reached on a walk Thursday night and pulled off a stunt that would make you think that Javier Baez was giving him lessons.

Len Kasper was just about to say, “Chatwood is taking off for second,” when he abruptly stopped short after uttering just, “Chatwood.” Somehow, Chatty made a false-break for second, but in the process, got so far into the head of Mets’ reliever, Wilmer Font, that he caused Font to balk, giving Chatwood the free trip to the next station.

Cubs pitcher Chatwood draws a walk, then pretends to steal and gets Font to balk. Brodie you watching? #EverybodyIn #LGM pic.twitter.com/YzwnUZNqw1

Willson Contreras Mic’d up: There are a few subtitles here, as Willson is initially speaking Spanish, but a good look at the Cubs’ catcher during a practice session.

Willson Contreras mic'd up for the #Cubs YouTube channel. Check it out:https://t.co/2dV0gR4d2g

Javy’s the man: I never understood women crying in the presence of Elvis Presley or the Beatles back in the ’60s, but I get it when a young fan meets his childhood hero. Watch how much time Javier Baez takes with this kid- it’s heartwarming.

Glad I’m not the only one who sees this: I wrote in a commentary a month or so back (and of course my colleague, Dan Marich, thought I was an idiot), that the idea of assigning wins, losses and saves to pitchers really didn’t say much. Case and Point: Lester could give up 15 runs in an inning, but if the Cubs score 20 before Jon comes out (after five innings), He’d get the win- certainly not a “winning” performance. Next, Hendricks could pitch a one-run, one-hitter through eight innings, but if the Cubs didn't score a pair of runs, The Professor would take the loss. Doesn’t really seem fair.

Pitcher wins, pitcher losses and no-decisions aren't worth much in the statistical scheme of things, but this is definitely an interesting fluke within Darvish's season log. https://t.co/EfnTVpGzRr

A single, multi-national MLB team? Believe it or not, the Tampa Rays are proposing a plan which would have them playing a part of their home games in the Tampa-St. Pete area, with the remainder being played in Montreal. I wrote about this more in depth in an “Odds and Ends” column that should post soon.

Baseball Quotes: “I don't want to play golf. When I hit a ball, I want someone else to go chase it.” -Rogers Hornsby

Reds: I’ve been saying it since January: Watch out for Cincinnati this year. They’ve now started to charge, already assuming fourth place in the Central, while sending the Pirates to the basement, and I think the Cardinals will be next. Although they’ve gotten on the winning-path (a win in Texas, then a sweep of the Astros, followed by a decisive, pair of victories against the Brewers in Milwaukee), the Reds are in the market for even more hitting power, but not just any slugger, they want one who’s controllable. 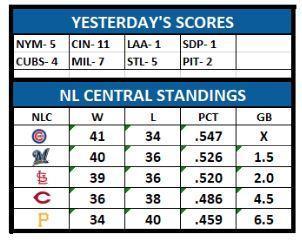