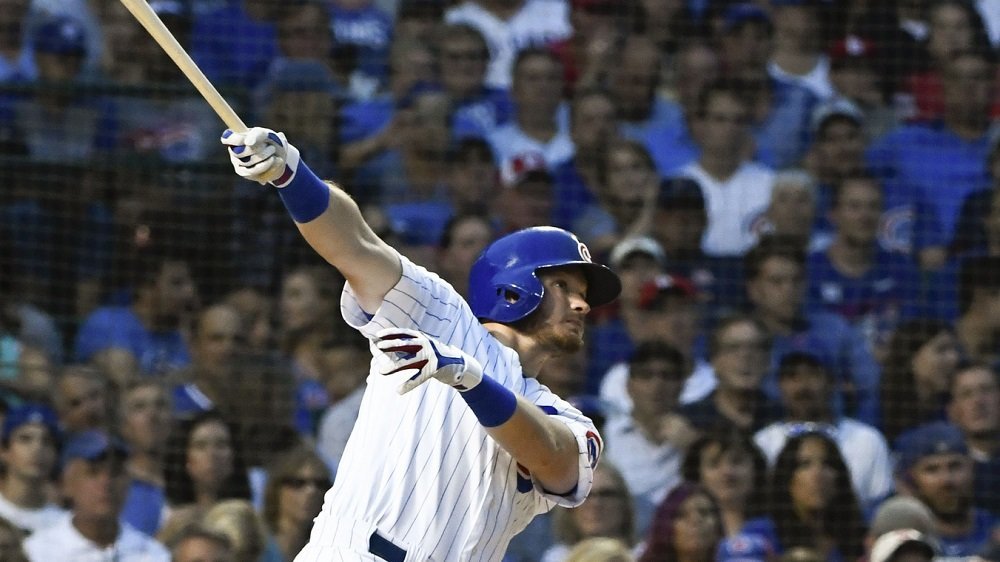 Ian Happ tallied one of 13 hits for the Cubs on a two-run homer in the bottom of the fifth. (Photo Credit: Matt Marton-USA TODAY Sports)

CHICAGO — Utilizing a five-run inning, the Chicago Cubs (56-38) grounded the rival St. Louis Cardinals (48-47) in MLB's first game of the unofficial second half of the season. Winning a slugfest that featured a combined 28 hits, the Cubs improved to 13-3 in their last 16 games with a 9-6 victory at Wrigley Field.

Cubs starting pitcher Kyle Hendricks endured a subpar start. True to his 2018 performance, Hendricks struggled out of the gate, giving up two runs through the first two innings. In the opening frame, Marcell Ozuna accrued one of three singles for the Cardinals, with his serving as an RBI single that scored Yadier Molina.

Then, in the second inning, Tommy Pham smacked a solo bomb out of the park beyond left field to put St. Louis ahead 2-0. Hendricks departed after giving up three runs on nine hits and one walk in 4.2 innings. His lone shining moment came in the fourth, when he threw out Pham at first base on a perfectly executed pick-off throw.

The Cubs got on the board in the third behind a two-out RBI single from right fielder Jason Heyward, who went 3-5 against his old club. If not for a fielding error suffered by Cardinals third baseman Jedd Gyorko on the previous play, the Cubs likely would have remained scoreless.

The Cardinals went back up by two runs in the fifth, as Kolten Wong hit an infield single with the bases loaded. Hendricks was then pulled from the game, and Cubs reliever Brian Duensing put an end to the threat without allowing the Cubs to suffer additional damage, which set the stage for the Cubs' big inning.

Once again, a St. Louis error aided the Cubs, as a throwing error by Paul DeJong on a leadoff single by Victor Caratini resulted in the Cubs catcher reaching second base right off the bat. Two plate appearances later, first baseman Anthony Rizzo, who served as the leadoff man on the night, drilled his second double of the game to score Caratini.

Soon afterward, with runners on the corners, Heyward tallied another RBI with a hard-hit single to right. Kris Bryant was then scored via a sacrifice fly by Ben Zobrist to put the Cubs up 4-3 for their first lead of the game. Cardinals starting pitcher Carlos Martinez remained in the game throughout the fifth inning. He was arguably left in too long, though, as Cubs center fielder Ian Happ took him deep to give the Cubs some breathing room.

Swatting a 408-foot bomb to right-center, Happ hit his 12th home run of the season to score Heyward and provide Chicago with a three-run lead. Martinez exited the game after the inning, having given up six runs on seven hits and one walk. He received the loss to drop to 6-6.

The offensive excitement did not stop after the starting pitchers exited. Cardinals first baseman Matt Carpenter powered out a solo home run to left in the sixth to cut the Cardinals' deficit to two. Later, in the seventh, the Cubs got that run back on an RBI single by Zobrist that scored Heyward. Heyward led off the frame with a single and proceeded to steal second base standing up before Zobrist brought him home. That marked Heyward's first steal of the season.

Cubs skipper Joe Maddon used three different relievers in the top of the eighth, limiting the Cardinals to one run in an inning that featured a costly Chicago error. On a potential inning-ending double play, Rizzo fielded a chopper and threw to shortstop Addison Russell for the force out at second base.

Russell then threw toward pitcher Justin Wilson at first base, but his throw sailed past Wilson, enabling Pham to come around from second base to score. The play resulted in the Cardinals making the score 7-5. Russell, who was charged with an error, appeared to attempt to hold back on his throw to first, as Wilson was not quite covering the bag at the time of the throw, but he was unable to do so.

Chicago regained control in the bottom half of the inning by scoring two runs on three hits. Russell redeemed himself with a leadoff double and next scored on a single up the middle by Caratini, who went 3-3 and scored three runs. Three at-bats after that, Bryant garnered an RBI with a single to left-center that plated Caratini to give the Cubs a four-run advantage.

The Cardinals tacked on one final run as a result of an RBI single by Wong in the ninth, but Cubs reliever Pedro Strop, who was filling in for injured Cubs closer Brandon Morrow, entered after that and quickly secured the 9-6 win for the Cubs with his third save of the year. Duensing earned the win to move to 3-0. Thursday's contest marked the first of eight games between the two divisional foes over the course of the next week and a half.