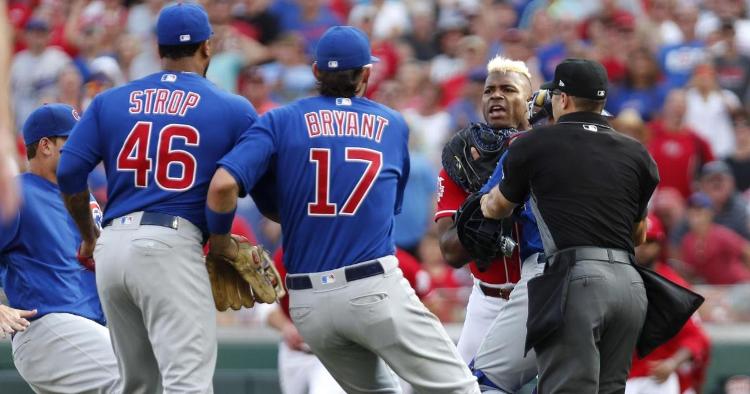 Tensions were high late in Saturday's contest between the Chicago Cubs and the Cincinnati Reds. (Credit: David Kohl-USA TODAY Sports)

CINCINNATI — What had all of the makings of a rather subdued, humdrum game between National League Central foes escalated rather quickly in the eighth inning on Saturday. After a mere one run was scored through seven innings of the contest between the Chicago Cubs (45-38) and the Cincinnati Reds (37-43), a grand slam that included taunting evolved into a hit by pitch that cleared the benches. In the end, the Cubs came away with a 6-0 victory at Great American Ball Park, with the final score not at all indicative of the ebb and flow of the game.

Continuing to carry the Cubs' batting order in the month of June, Jason Heyward put the Cubs up 1-0 with a 395-foot solo blast hit out to right-center in the top of the second. Prior to jacking his 13th dinger of the season, Heyward made a spectacular backhanded catch on the Reds' first at-bat of the game. Later, in the bottom of the seventh, Heyward doubled off a runner at first after racing in to catch a popup in shallow right field. With that being said, solid defense was a theme of the game for the Cubs in their shutout, as they forced the Reds into going 0-for-7 with runners in scoring position and stranding nine.

Another theme of the day for the Cubs was excellent starting pitcher, with starter Jose Quintana pitching six innings of scoreless ball, in which he struck out four and did not issue any walks. Outside of giving up the home run to Heyward, Reds starter Luis Castillo also pitched well, and the Reds' decision to pull him before the eighth came back to bite them. Three different relievers toed the rubber for the Reds in the top of the eighth, and the third and final one, Jared Hughes, inherited three baserunners with one out when taking the mound. Two pitches into his stint, Hughes was victimized by superstar Cubs slugger Javier Baez, who cranked a 351-foot grand slam over the wall in right to put the Cubs up 5-0.

Baez's fifth grand slam of his career served as his 20th homer of the year, and "Javy" had a little fun at Reds right fielder Yasiel Puig's expense by playfully taunting the outfielder while rounding the bases. Flashing the signal that coaches give when they want outfielders to play farther back, Baez chuckled while ribbing Puig on his grand-slam trot. Puig is known as a good-natured showman, but he has a bad habit of rubbing his opponents the wrong way with his persistent antics. Therefore, when Cubs reliever Pedro Strop proceeded to hit Puig with a questionable pitch on a 3-0 count in the bottom of the eighth, it was understandable that Puig assumed that Strop had intentionally beaned him.

The benches cleared as Puig had to be held back from charging the mound after getting drilled on the thigh. The Cubs led 5-0 at the time of the hit by pitch, which came with two outs and first base open, and the pitch certainly did have an intentional look about it. However, Strop avoided being ejected, as did Puig, and the fracas did not boil over into anything violent. Puig and Strop mouthed at each other after Puig reached first base, but, once warnings were issued to both teams, play resumed. Strop was not fazed by the incident, as he quickly tabbed an inning-ending strikeout thereafter.

The Cubs' Addison Russell led off the ninth with a single and was eventually scored on a 2-out double off the bat of Kyle Schwarber. With his club trailing 6-0 at that point, Reds manager David Bell did not have much to lose when he came out to argue another hit by pitch that occurred with two outs in the bottom of the ninth. This beaning was obviously unintentional, but Bell likely wanted to give the crew chief an earful concerning the fact that Strop wast not tossed in the eighth. Ultimately, the Cubs picked up a commanding 6-0 shutout win to even the 3-game series at one game apiece ahead of Sunday's series finale.