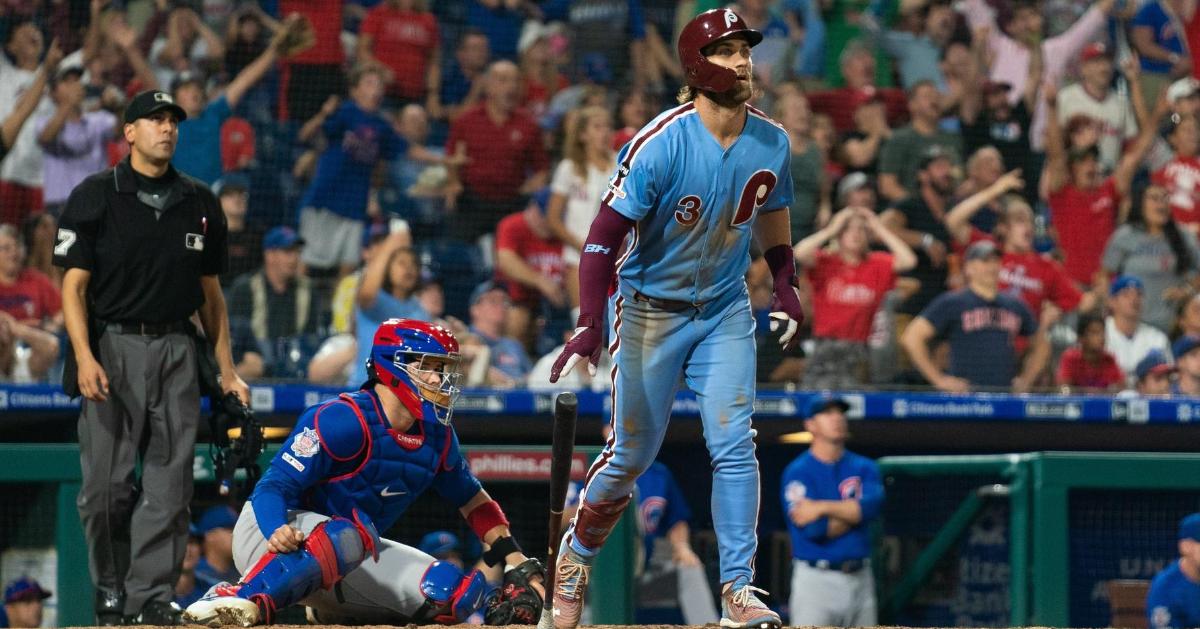 PHILADELPHIA — A ninth-inning meltdown of epic proportions led to a 3-game sweep being suffered by the Chicago Cubs (64-57) at the hands of the Philadelphia Phillies (63-58) on Thursday. Giving up six runs in the bottom of the ninth, the Cubs ultimately fell on a walkoff grand slam by Bryce Harper. The Cubs squandered a 5-0 lead at Citizens Bank Park, and all seven of the Phillies' runs in the 7-5 contest were scored in the final two frames.

The Cubs wasted a stellar performance by starting pitcher Yu Darvish, who struck out 10 batters without issuing a single walk in seven scoreless innings of work. As a result, Darvish became the first Cubs hurler in the live-ball era with eight or more strikeouts and zero walks in four consecutive starts. Darvish squared off against Phillies starter Drew Smyly, who was a member of the Cubs while he recovered from Tommy John surgery last season. Smyly gave up five runs on seven hits and two walks and was taken deep twice.

Batting leadoff for the Cubs on the night, Anthony Rizzo continued thrived in the leadoff spot, which he is prone to do. Hitting his first home run since July 27, Rizzo took Smyly deep for a solo shot to right-center in the top of the third, thereby putting the Cubs up 1-0. The next inning saw the Cubs manufacture three runs on four hits after Ian Happ led off with a triple that ricocheted off the top of the wall in right field. David Bote plated Happ with an ensuing RBI double, and, with two outs, Albert Almora Jr. and Rizzo hit back-to-back RBI singles to make the score 4-0 in favor of the North Siders.

The Greatest Leadoff Hitter of All Time strikes again.#TeamRizzo pic.twitter.com/XHQaYJ75Z4

Chicago slugger Kyle Schwarber made Cubs history in the top of the fifth, as he became the fastest Cub to swat 100 homers by reaching the century mark in his 453rd game with the North Siders. Drilling a 417-foot no-doubter out to straightaway center field, Schwarber increased the Cubs' lead to five runs with his milestone solo bomb. Darvish escaped the fifth with the shutout intact, thanks in large part part to Cubs catcher Victor Caratini picking a runner off at first base with men on first and second and one out.

The Phillies, who wore their throwback powder-blue uniforms on the evening, finally put a run on the scoreboard in the bottom of the eighth, but a great throw home by Cubs right fielder Nicholas Castellanos limited Philadelphia to just one run in the inning. Corey Dickerson hit a 2-out single to right that pushed one run across before Castellanos gunned down an attempted scorer at the dish to end the frame. However, the Cubs' good fortune totally dissipated in the bottom of the ninth, and the fact that shortstop Javier Baez was not in the game heavily contributed to that.

Baez was scratched from the lineup on Thursday afternoon because of an illness, leading Bote to make a rare start at shortstop. Furthermore, Happ, who only occasionally starts at second base, served as the starting second baseman on the night. The unorthodox middle-infield alignment came back to bite the Cubs in the ninth, beginning with Bote misplaying a ground ball with one out. Bote's error gave way to a base knock, which then led to the Phillies hitting two straight screamers past Happ and into the outfield.

A tried-and-true infielder could have potentially stopped one or both of the burners smacked up the middle, but Happ, an outfielder by trade, was unable to do so. The first such single scored a run and chased Cubs reliever Rowan Wick from the game with runners on the corners. Pedro Strop entered to toe the rubber after Wick and struggled mightily. A second RBI single that skirted past Happ pulled the Phillies to within two runs of the Cubs, and Strop proceeded to hit a batter on the hand with a pitch that got away from him, thus loading the bases.

Strop was yanked in favor of Derek Holland on the mound after the hit by pitch, but Holland was unable to escape the jam unscathed. Harper capped off his 6-pitch at-bat with a 413-foot moonshot into the upper deck beyond right field. Energized by his game-winning grand slam, Harper raced around the bases in a hurry, with the towering blast providing the Phillies with a 7-5 victory. The deflating loss and resulting sweep epitomized the road woes that have plagued the Cubs in recent months, but the disastrous ninth-inning collapse was especially horrible.

BRYCE. IN. HIS. VEINS. ??#RingTheBell pic.twitter.com/i9O3JCBwD3