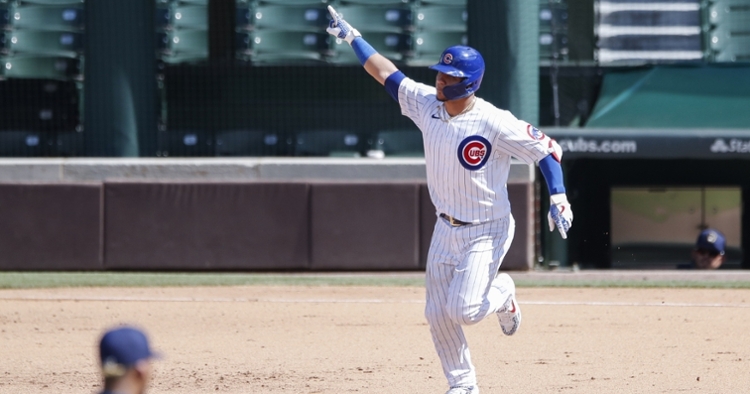 As weird as this may be to say, I don't mind baseball without fans and have enjoyed what I have seen this weekend. There have been many complaints about playing sports without fans, and many think games should be on hold until fans are allowed back in the seats.

I am not one of those people, crowds are not that important to me. I watch baseball or sports, for that matter, to watch the quality of play on the field. Paying attention to the fans is something I have never done, and it just adds a different mindset to the game when they are there. However, sports are sports, and the quality of play was what I watched for most this weekend.

To be honest, I knew there was going to be struggles early and expect lots of inconsistent play the first two weeks of the season as a lot of players are still in spring training mode trying to get to the right spot. With that being said, the Cubs didn't play overly well this weekend minus yesterday but still managed to greet David Ross with his first career win, and his first series win as a manager.

Here are five takeaways I took away from the series win this weekend against the Brewers.

Kyle Hendricks proved he is an ace

After much debate on whether Yu Darvish or Kyle Hendricks should get the opening day nod, Ross elected to give Hendricks the well-deserved opening day start, and that was the right decision. Hendricks proved he could pitch in big games before, but after his performance on Friday, he has shown he has what it takes to be an ace.

Hendricks mowed through the Brewers lineup, limiting them to three hits while going the distance walking one and striking out nine in the complete-game effort. His 102 pitches was beautiful to see as often Joe Maddon would pull him in the 70 or 80 pitch mark. Hendricks was in complete control from the start and had the Brewers hitters guessing all game. When we talk about Greg Maddux, those are the kind of starts Greg Maddux often gave the Braves for so many years.

The Professor was pretty ruthless on the first day of class. pic.twitter.com/MUlLi77CTj

Was that the real Tyler Chatwood?

After a horrendous first year in Chicago, Chatwood was demoted to the bullpen last season, where he pitched much better. After Cole Hamels left for Atlanta this off-season, a starting spot in the rotation opened, and Chatwood was given the opportunity to start again. Not only that, but he also earned the No. 3 spot after projecting to be the teams No. 5 and proved he could be a real X factor this season.

Ever since coming to Chicago, teams knew about the stuff Chatwood possessed if he could control it. I had compared him to Jake Arrieta in the past from when he came from Baltimore. Both had excellent stuff their entire career, but neither one of them could harness that control. Once Arrieta figured it out, he went on a three-year run-in Chicago where he established himself as a legitimate ace. After Chatwood's start yesterday, could he be on the verge of figuring it out?

Chatwood was in control of the Brewers all game long, but he had the command the Cubs were waiting for since his arrival. In six innings, Chatwood limited the Brewers to just one run, walking two and striking out eight. The promising thing to take away from that was his movement was where the Cubs expected it to be, but he was also getting calls on the corners he wasn't able to last season. If he continues to pitch like that throughout the year, Chicago has a much deeper rotation.

Kris Bryant might not be the answer at leadoff

I know we are just three games in, but Bryant might not be the answer we had hoped. He has only one hit this season, but he is already striking out at an alarming rate as he looks completely lost at the plate right now. The more at-bats, the more comfortable he will get, but how long will Ross leave him there if the struggles continue.

The one good thing Bryant has brought to the leadoff spot is the ability to work the count. Friday alone against Brandon Woodruff, Bryant saw 17 pitches in his first two plate appearances. He saw another eight-pitch at-bat against Corbin Burnes on Saturday and another lengthy at-bat against Freddie Peralta yesterday.

While most of those bats didn't result in hits, Bryant sees a lot of pitches, which helps the rest of his teammates get great looks at what the opposing pitcher all has to offer. Hopefully, some of these strikeouts can turn into walks or even hits because his bat is a vital part of the lineup.

After a solid rookie season, Happ struggled in 2018 and did worse in 2019. His horrible performance in the spring of last season led to his demotion to Iowa, where he spent the first four months of the season trying to get back to the majors. After going through several struggles, Happ finally seemed to figure things out and was eventually called back to Chicago for the final two months last season.

Immediately after arriving, you could sense that Happ was a different player as a lot of the adjustments he needed to make, he put on display at the MLB level where he ended up being the teams best hitter the final two weeks of the year. It looks like those adjustments stuck with him this season, as Happ has gotten off to a great start.

Happ sees the ball well, but he is driving it to all fields with power, which is a great thing to see from the No. 9 spot in your lineup. I don't expect Happ to stick there much longer should his hot start continue as the Cubs will have no choice but to move him up in the order. Who knows, maybe Happ is the answer for Ross at leadoff?

Thank you to the bottom of the order

The Cubs have always benefitted from a deep lineup, but adding the DH made them that much more potent. With guys like Bryant, Rizzo, and Javy Baez hitting 1-3, the Cubs were expected to have one of the most dangerous tops of the lineups in baseball and were looking for them to set the table.