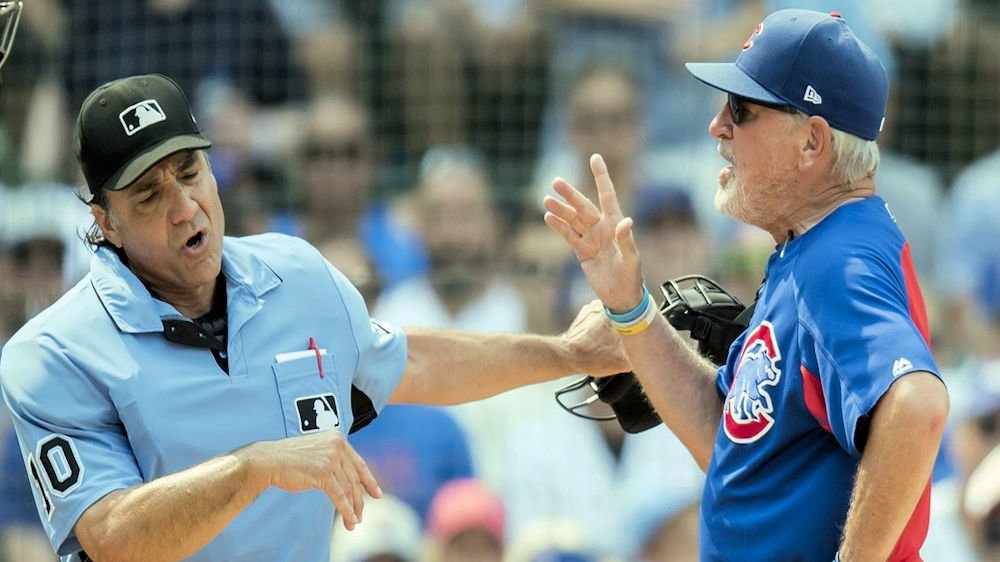 Joe Maddon was ejected when voicing his displeasure over a strikeout of Ben Zobrist. (Photo Credit: Patrick Gorski-USA TODAY Sports)

CHICAGO — A frustrating afternoon for the Chicago Cubs was best encapsulated by the ejections of manager Joe Maddon and second baseman Ben Zobrist because of a questionable strike-three call in Zobrist's sixth-inning at-bat. Not having much success at the plate, the Cubs were shut out for the second time in five games on Tuesday afternoon, losing to the Milwaukee Brewers 7-0 at home.

Pitching seven shutout innings of three-hit ball, Brewers starter Jhoulys Chacin dominated the Cubs' batting order. Striking out 10, Chacin was stellar on the day and moved to 12-4 with the win. Chacin was assisted in a major way by the Brewers' offense, as the Brew Crew took a five-run lead in the top of the third and cruised to victory after that.

Giving up three home runs, Cubs starter Jose Quintana disappointed in a losing effort. He allowed the first two dingers in the opening frame, with Milwaukee outfielders Lorenzo Cain and Ryan Braun going yard. Braun's first-inning homer, which was of the two-run variety, gave the Brewers a three-run edge. In the third, Braun tallied his second two-run blast of the game off Quintana to make the score 5-0.

People were still standing from the anthem when LoCain hit this one outta here: pic.twitter.com/8anoPtvj8w

We literally JUST got the highlight cut from his first 2-run HR of the day and then Braun goes and hits another one. ??

Attention Cubs fans seated in the LF bleachers....
Today is your lucky day as Ryan Braun is handing out free souvenirs! pic.twitter.com/FnJzRoOLcd

Quintana exited after five innings, in which he was taken for five runs on six hits and one walk. He was handed the loss for the third time in his last four starts, making him 10-9 on the year. Milwaukee added a couple of insurance runs after Quintana's departure. Catcher Erik Kratz produced the fourth home run of the contest for the Brewers via a solo shot with two outs in the sixth. Then, in the eight, Kratz picked up another two-out RBI with a double.

Erik Kratz caught all of this one. pic.twitter.com/gbeMK3TdQk

Offensively, the Cubs favored poorly from start to finish. Mustering just three hits and two walks all game, the Cubs were fairly listless at the plate. As for Zobrist, who was one of three Cubs to attain a hit, he disagreed with the home-plate umpire's strike call on a full count in the bottom of the sixth.

Zobrist, who, thinking he had just earned a walk, was in the process of trotting to first base when he was rung up, thought that the pitch in question was outside. The usually subdued veteran passionately disagreed with the umpire over the call, and Maddon came onto the field to back Zobrist up. While Maddon was immediately ejected, which marked his second ejection in four days, Zobrist was not thrown out until he again had words with the umpire at the conclusion of the eighth frame. That served as Zobrist's first ejection at any level of baseball.

Ben Zobrist got ejected by umpire Phil Cuzzi for telling him “that’s why we want an electronic strike zone” ??????pic.twitter.com/lZXR6YL15P

For the first time in franchise history, the Cubs (68-50) have now been shut out in three consecutive meetings with the Brewers (68-54), who will have a chance to earn a two-game sweep tomorrow afternoon. Clinging to a two-game lead over Milwaukee in the National League Central, the North Siders will look to break their scoreless stretch against the Brew Crew in Wednesday's series finale.