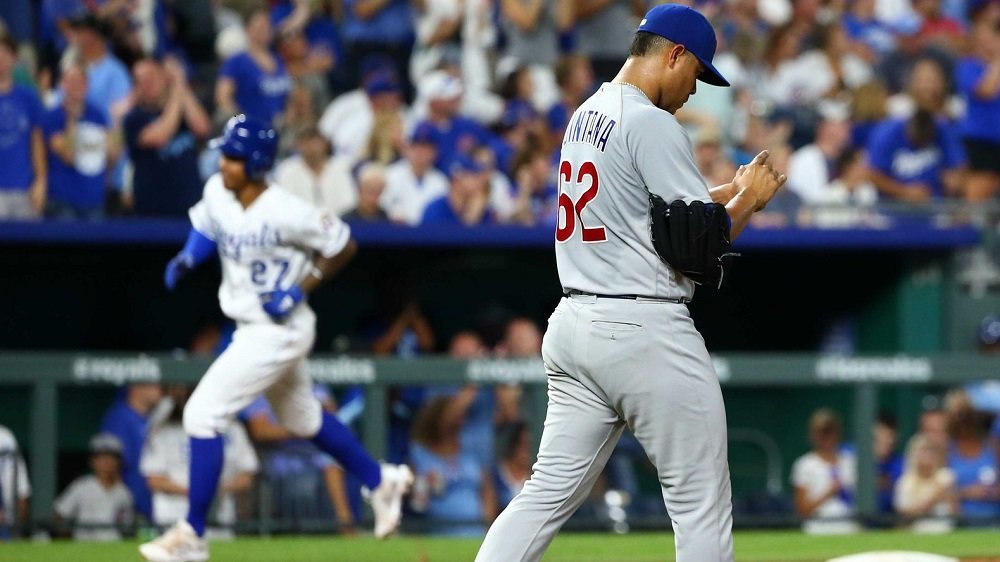 KANSAS CITY — Looking to garner their first sweep of the unofficial second half of the regular season, the Chicago Cubs, who last earned a sweep when they skunked the San Diego Padres in a three-game set just before the All-Star break, laid an egg against the Kansas City Royals on Wednesday. The night after they shut out the Royals, the Cubs were shut out themselves in a 9-0 beatdown.

Mustering just three hits and two walks, the Cubs were lackluster, to say the least, at the plate in the series finale at Kauffman Stadium. Rookie Royals starter Heath Fillmyer dominated Chicago, giving up just three hits in a scoreless seven-inning stint on the mound en route to picking up his first career win and becoming 1-1 overall.

In a fast-paced game that lasted approximately two and a half hours, the final score was rather deceptive, as the Royals did not pull away until rather late in the contest. Scoring seven combined runs in the seventh and eighth innings, Kansas City took advantage of Cubs starter Jose Quintana perhaps being left in the game too long.

Quintana fared well for most of his outing, despite receiving no run support. His only significant mistake in the early innings was giving up a two-run double hit down the left-field line by Drew Butera with two outs in the second inning. The Cubs actually had a chance to take the lead prior to that, as they boasted men on second and third with two outs in the opening frame. However, Tommy La Stella, who served as the Cubs' designated hitter mere hours after getting injured in a simulated game on Wednesday afternoon, popped out to end the inning and keep Chicago scoreless.

The Cubs stranded all 10 of their runners who reached base on the evening. In the top of the sixth, La Stella and third baseman David Bote tallied one-out singles, but Chicago failed to get the ball out of the infield in the ensuing two at-bats. That paved the way for the Royals to take total control of the game in the bottom of the seventh.

After giving up a pair of singles that put runners on the corners to start the inning, Quintana should have probably been yanked, but Cubs manager Joe Maddon opted to leave Quintana in, which proved costly. Soon afterward, Kansas City's Adalberto Mondesi went yard off Quintana for a three-run homer that put the Royals ahead by five runs.

Tyler Chatwood, who was recently relegated to the bullpen, relieved Quintana later in the seventh and went on to give up four runs on three hits and two walks in a shaky 1.2-inning appearance. A double by Jorge Bonifacio with no outs in the bottom of the eighth brought two runs across, the second of which was scored because of an Addison Russell error. That was followed by an RBI triple from Brett Phillips, which provided the Royals with an eight-run advantage.

For good measure, Butera collected his third RBI of the night with a sacrifice fly that scored Phillips in the eighth to round out the 9-0 win for the Royals, who now stand at 35-79. The Cubs, who dropped to 66-48 with the loss, were shut out for the first time since June 17 in the embarrassing defeat. Quintana received a losing decision and fell to 10-8 overall after giving up five runs on six hits and four walks in 6.1 innings of work.