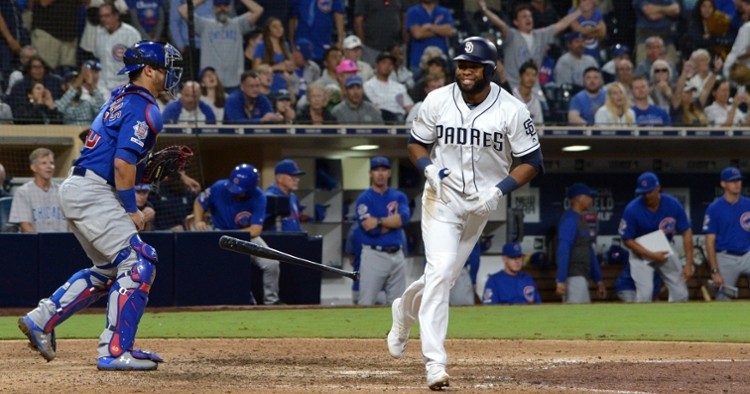 SAN DIEGO — A high-flying slugfest at Petco Park ended in a very unfitting fashion on Tuesday night, with three straight walks resulting in the Chicago Cubs (77-67) losing to the San Diego Padres (67-77) on a bases-loaded base on balls. Kris Bryant and Jason Heyward each went yard twice for the Cubs in the extra-innings duel, but the Padres, who squandered an early 4-run lead came out on top by a final score of 9-8 in 10 innings of play.

Bryant and Heyward were responsible for a combined four of the Cubs' nine hits, six of the Cubs' runs scored and seven of the Cubs' RBI on the evening, spoiling an otherwise solid 5-inning start by young Padres hurler Ronald Bolanos. Making his second career big-league outing, Bolanos led off the second frame by walking Bryant. A few at-bats later, Heyward tagged Bolanos for a 2-run dinger that barely cleared the wall in left field and put the Cubs up 2-0.

Jose Quintana started on the mound for the Cubs, and he was certainly not at his best. Quintana pitched just three innings before being yanked, as he gave up six runs on seven hits. An RBI base knock by Luis Urias plated the first of five runs scored by the Padres in the bottom of the second. With one out and the bases loaded, Ben Zobrist botched a potential double play for the second straight game. Sending his throw to second base into left field, Zobrist enabled three runs to score. Later in the inning, Nick Martini hit a sacrifice fly that put he Padres ahead 5-2.

A solo homer from Ty France in the bottom of the third increased the Padres' lead to four runs, but the Cubs were able to get that run back, thanks to a successful challenge by Joe Maddon, in the top of the fourth. After reaching third base on a wild pitch, Heyward tagged up and attempted to score on a fly ball that was caught by Martini in left field. Martini threw a laser to the dish, and Heyward was called out. However, replay showed that Heyward successfully avoided the catcher's mitt before touching home plate, and the call was overturned, thereby gifting the Cubs a run.

With two outs in the top of the fifth, Bryant, who played for the local San Diego Toreros in college, connected on a curveball thrown by Bolanos and lifted a 2-run round-tripper that plated Anthony Rizzo, whose rookie MLB season was spent with the Padres. The Padres went back up by three runs in the bottom of the seventh, though, with Cubs relief pitcher Brandon Kintzler giving up an RBI triple and an RBI single in consecutive at-bats. The Padres went on to load the bases with two outs, but Chicago reliever David Phelps ended the frame by drawing a groundout.

Just two plate appearances apart, Bryant and Heyward each homered again in the top of the eighth. Rizzo led off with a base hit and was then brought home on a 403-foot 2-run tater smashed by Bryant. Soon afterward, Heyward hammered a game-tying 417-footer, with the solo bomb knotting the game up at 8-8. The Cubs failed to advance any runners into scoring position the rest of the way, though, which led to a shoddy performance on the bump by Steve Cishek.

Coming out of the Cubs' bullpen to pitch the bottom of the 10th, Cishek forced a groundout on the third pitch of his stint, but it was all downhill from there. Once Urias reached base on an infield single, Cishek struggled mightily with his command and walked two Padres in a row to load the bases with one out. Maddon opted not to pull Cishek and instead went with a five-man infield. Maddon's defensive ploy was not put to the test, however, as Cishek walked Manuel Margot on four pitches, thus ushering the winning run home. The 9-8 walkoff triumph for the Padres marked the fourth loss suffered by the Cubs in their last five games.