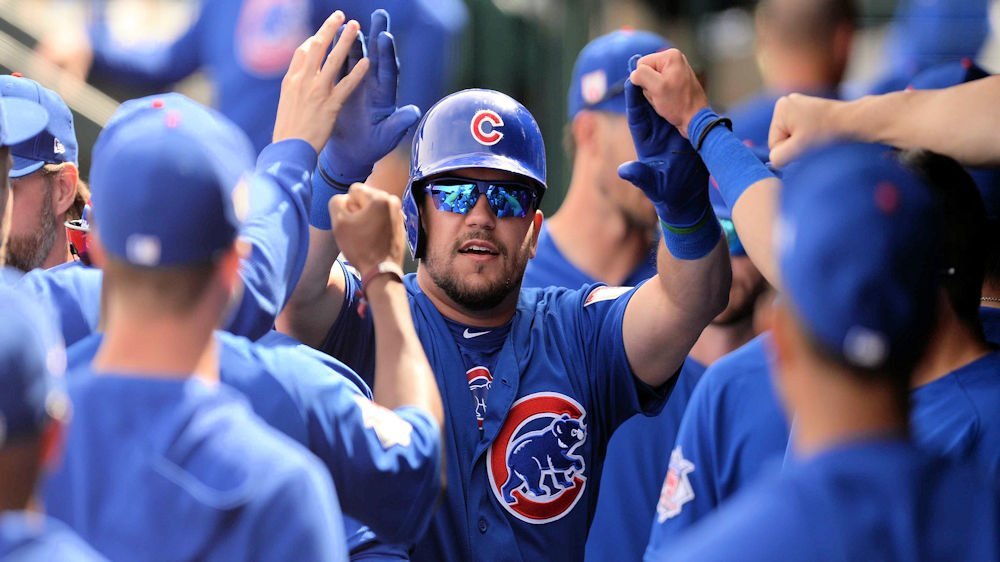 Righty, Alec Mills was due to start this afternoon but was a late scratch (back stiffness). Righty, Duane Underwood Jr., would subsequently get the nod to face off against Angels’ righty, Griffin Canning (0-0, 11.57 ERA). Both teams entered the game with records of 9-6.

The Angels would score in the first, but it was all Chicago after that winning by a score of 11-4.

T1: Duane Underwood Jr. would retire the first man on a flyout (Fletcher), but he’d serve up a homer to Bour to give the Halos an early lead. He’d get the next man by groundout (Smith), but an error by Daniel Descalso would give the Angels another baserunner. He’d end the inning with no further damage when Puello flew out to Jason Heyward.

T2: Pedro Strop would pitch the second, giving up a leadoff single to Adell. Tovar would single next, but Adell would be out after tripping over second base while trying to advance. (Adell was injured and removed). Strop would then walk Jones, but he’d gain his second out on a fielder’s choice groundball to Zobrist. Strop would get out of it on a groundout by Fletcher.

B2: (LAA: RHP Canning): The Cubs would come alive in the third, sending nine men to the dish. Kyle Schwarber would start the inning with a leadoff double, and after a Descalso pop-out, Nico Hoerner would draw a walk, followed by a single by Jim Adduci, which scored Schwarbs and sent Hoerner to third. Francisco Arcia would walk to load the bases with two away, followed by Johnny Field who’d strikeout. Heyward and Zobrist would draw back-to-back walks, scoring Hoerner and Adduci, and ending Canning’s day on the mound. RHP Ryan Clark would replace Canning and retire Rizzo on a flyout to end the inning.

T3: Steve Cishek would get the ball in the third, quickly retiring the side with a pair of strikeouts (Bour, Puello) and a groundout (Smith).

B3: (LAA: RHP Clark): Schwarber would single to open the third, followed by Descalso who fanned. Nico Hoerner got back at it, with a two-run blast to put the Cubs up 5-1. Adduci would fly out to left, followed by Arcia’s groundout to end the inning. Cubs lead 5-1.

T4: Righty, George Kontos would take the mound in the fourth, giving up a leadoff triple (Ward), followed by a double (Way) bringing the Angels to within three. Kontos would retire Tovar on a line-out, followed by another double (Jones). He’d get Kruger and Fletcher on a pair of flyouts to Schwarber to end the inning. Cubs lead 5-3.

B4: (LAA: RHP Jewell): Jewell would open by retiring Field on a strikeout and Heyward on a groundout, but with two out, Zobrist would double to left. Rizzo would fan to end the inning. Cubs lead 5-3.

T5: Right-hander, Rowan Wick would toss the fifth, quickly retiring Bour on a groundball. Smith and Puello would single before Wick would retire Ward on a swinging strikeout. Wick would then walk Way to load the bases, but a flyout by Tovar would the innings without a run.

B5: (LAA: RHP Curtiss): Schwarber would pop-out to start the frame, but Ryan Court would reach on an error, followed by Hoerner who’d reach for the third time, when a pitch hit him. Adduci would fan for the second out, but Arcia would single to third, scoring Court and sending Hoerner to third. Arcia would steal second on a pitch in the dirt, then Feld would walk to load them. Zack Borenstein would pinch-hit for Hayward, who would groundout to end the frame. Cubs lead 6-3.

T6: Carlos Ramirez would come on to pitch the sixth, opening up with a leadoff walk to Jones. Kruger would fly out to center, then Fletcher would pop-out to short, followed by a strikeout (Bour) to end the inning.

B6: (LAA: RHP Rhoades): Jhonny Bethencourt and Machin would strikeout to start the inning, but with two away, Roberto Caro would reach on an infield single. Ryan Court would strike out to end it. Cubs lead 6-3.

T7: Carlos Ramirez would return to pitch the seventh, retiring the side in order on a pop-out (Smith) and a pair of groundouts (Puello and Ward).

B7: (LAA: RHP Rhoades): Hoerner would add to his offensive stats with a leadoff double, followed by Adduci’s flyout, but Hoerner would tag and take third. Hoerner would score on Taylor Davis’ single to right, which would end the day for Rhoades, who was being replaced by RHP Matt Ramsey. After walking Field, Ramsey would serve up a pitch to Borenstein, resulting in a single. Bethencourt’s groundout would score another run, followed by Vimael Machin’s two-out walk. Roberto Caro would pop-out to end the frame, stranding two. Cubs lead 9-3.

T8: Alberto Baldonado (LHP) would pitch the eighth, retiring the side in order on three groundouts (Way, Baldoquin, Justus).

B8: (LAA: RHP Klonowski): Court would open the inning with a single to right. Aramis Adelman would fan, and Tyler Duran would ground, but Davis would double to right, scoring Court. Connor Myers double would score Davis, putting the Cubs up by a score of 11-3 before Borenstein would strike out to end the inning.

T9: Oscar De La Cruz would pitch the ninth, getting Kruger to fly out before issuing a walk to Sandoval, followed by a ground-rule double (Rojas). Leon would then single to center, scoring Sandoval. De La Cruz would fan Urena, then finish it by striking out Way. Cubs win 11-4 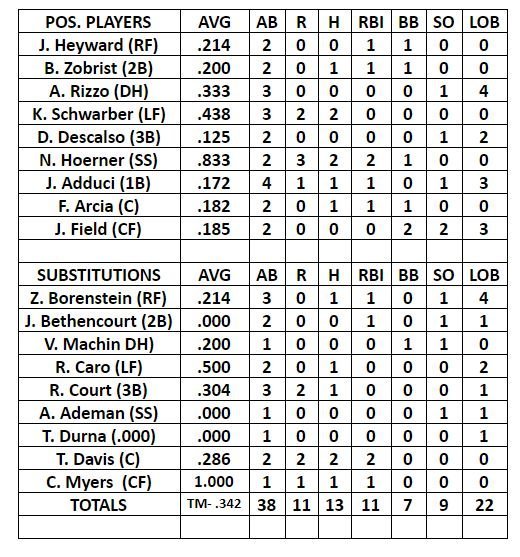 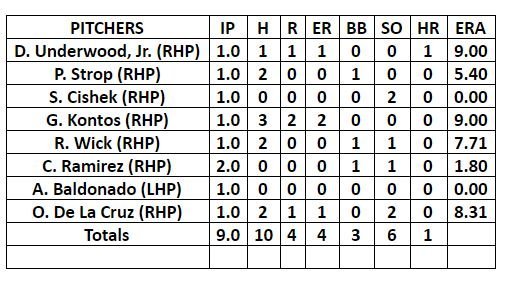 With tough pitching and a relentless offense, the Cubs would hammer away all game, winning by a final of 8-0.

T1: (SFG: RHP Rodriguez): Cubs go down in order on a fly-out by Addison Russell, a strikeout (Cristhian Adames) and a groundout by Kris Bryant.

B1: Cole Hamels would issue back-to-back leadoff walks (Ferguson, Posey) to start the frame before retiring Belt on a strikeout. Longoria would then tag Hamels for a single, loading the bases with one away. He’d retire Crawford on a groundout to end the inning scoreless. Game tied 0-0.

T2: (SFG: RHP Rodriguez): Javier Baez would hit a leadoff single, followed by Victor Caratini’s single, which advanced Baez to third. Phillip Evans struck out to give the Cubs their first out. Jared Young would single, scoring Baez and moving Caratini to second. Back-to-back singles (Jared Young, Trent Giambrone) would score Caratini and move Young to third. A sac-fly by Wynton Bernard scored Young before the inning ended. Cubs lead 3-0.

B2: Hamels would send the Giants down in order on a fly-out (Solarte) and a pair of strikeouts (Williamson, Parra.)

T3: (SFG: RHP Rodriguez): The Cubs would go quietly, in order, again an Adames flyout and strikeouts by Russell and Bryant. Cubs lead 3-0.

B3: Hamels would attack again in the third, getting Sandoval to groundout to start the frame. Ferguson would tag Hamels for a single, but Posey would flyout before Belt singled, moving Ferguson to third. Hamels would end the inning without damage, retiring Longoria on a groundout.

T4: (SFG: RHP Rodriguez): Rodriguez would start the frame, but RHP Melvin Adon would finish it. After Rodrigues got Baez by flyout and Caratini by strikeout, Evans would single to left. Evans would end the inning when Posey threw him out trying to steal second.

B4: Joe Maddon would send Hamels out again to start the fourth, but he’d be pulled after retiring Crawford. Carasiti would open with a strikeout (Solarte), but he’d walk Williamson, before retiring Parra to end the inning. Cubs lead 3-0.

T5: (SFG: RHP-Melancon): The Cubs go down in order, on a trio of groundouts (Young, Giambrone, Bernard).

B5: Carasiti would start the fifth, giving up a leadoff single, and later a walk (Belt), but would escape without harm on a force-out (Ferguson). Righty Jordan Minch would finish it with a pair of strikeouts (Posey, Longoria). Cubs still lead 3-0.

B6: Carl Edwards, Jr. would hurl the sixth, making light work of the Giants on a pair of groundouts (Crawford, Solarte), then finishing it up with a swinging strikeout to retire Shaw.

T7: (SFG: LHP- Smith): Evans would single to start the frame, followed by Young’s flyout to left. The inning would end when Giambrone hit into a 5-4-3 double play. Cubs lead 4-0.

B7: Maddon would hand the ball to lefty, Kyle Ryan, for the seventh, who would walk two, but fan three for a scoreless frame.

T8: (SFG: RHP- Moronta): Wynton Bernard would go down swinging, but Zack short would triple to right, followed by Balaguert’s double, which scored Short. Levi Jordon would pop-out to first, and the inning would end on Andy weber’s strikeout. Cubs lead 5-0.

B8: Kyle Ryan would return, retiring Garcia (line-out) and Green (groundout), before giving up a single (Valera). Avelino would ground out to end the frame. Cubs lead 5-0.

T9: (SFG: RHP- Vincent): The Cubs would start the frame by adding to their lead on PJ Higgins leadoff home run. Eddy Martinez would ground out, but Jared Young would keep the inning alive with a double to center. Young would take third on a wild-pitch but would be held there on Christian Donahue’s groundout to second. RHP Jose Lopez would replace Vincent, but before it was over, the Cubs would add a total of three runs. Cubs lead 8-0.

B9: Mike Zagurski would close it out, sending down the first two in order on a groundout (Shaw), a pop-out (Garcia), before giving up a double (Ramos). The game would end on a groundout by Gerber. Final score Cubs-8; Giants-0.

Tomorrow the Cubs (now 11-6) will travel to face the Brewers (6-8), for the third and final time this spring, with the series tied at one game each. In the two meetings thus far, the Cubs have outscored the Brewers by a total of 12-11. (Pitchers TBD) 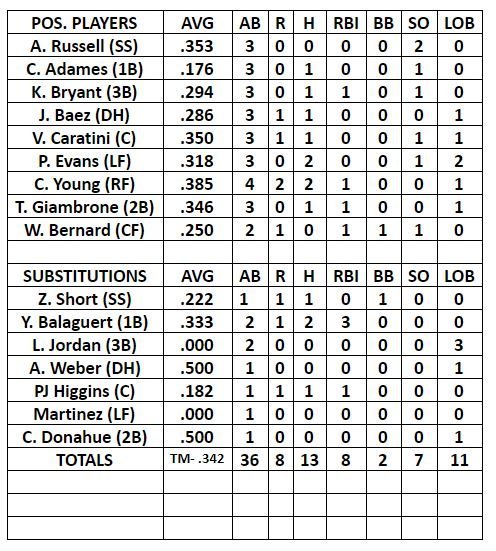 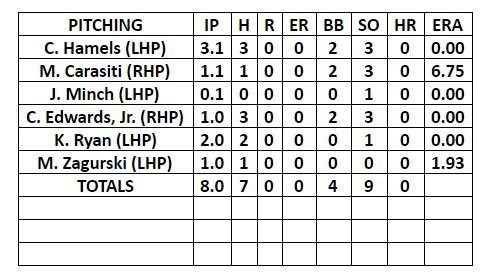