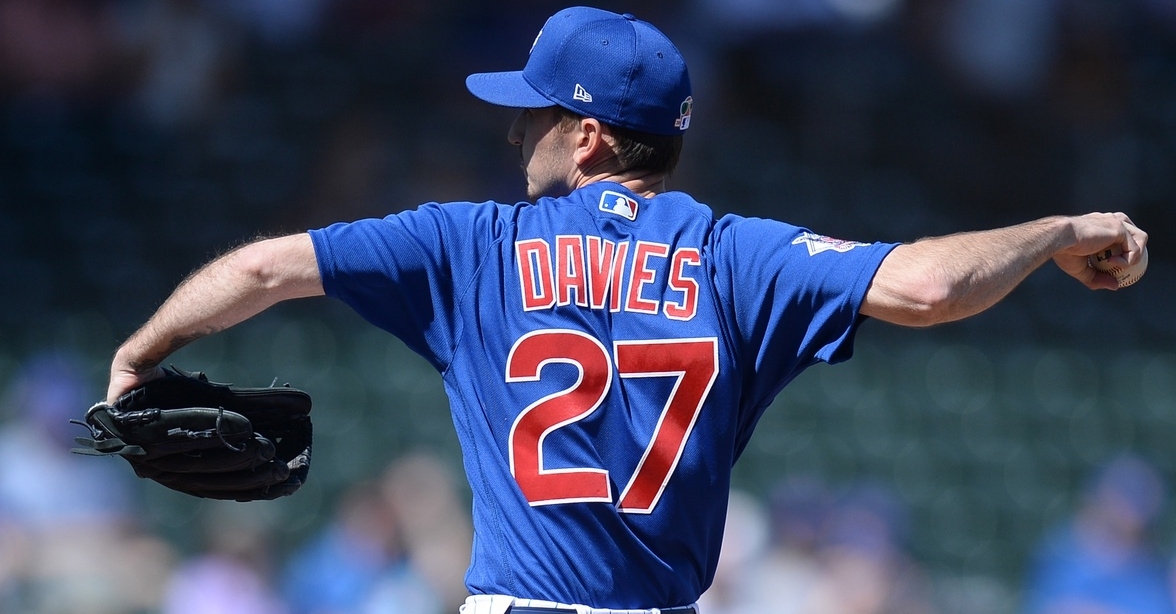 The Cubs continued their winning spring ways on Monday with a 9-0 victory over Texas. Not only are the Cubs winnings game right now, but they are doing it in a variety of ways which is a pleasant surprise. Their pitching, especially starting pitching, has been lights out, their defense has been strong, and except for a few games, they're consistently hitting the ball.

None of this will matter when the season starts but fans like what they see right now. Zach Davies made his second start of the spring and continued to twirl zero's, allowing zero runs with one walk in three innings of work. What was more impressive was he only needed 26 pitches to do that, pitching to contact and letting the defense go to work.

While Texas wasn't making hard contact, the Cubs were, and it happened right away in the first inning. An Ian Happ leadoff single got things started, but he was erased on a fielder's choice shortly after. Following an error that allowed Kris Bryant to reach, Joc Pederson continued his excellent start to the spring, placing one over the head of second for the RBI single and 1-0 lead. Little did the Cubs know that would be all the runs they needed.

A scoreless fourth from Kohl Stewart gave way to the Cubs offense, and Nico Hoerner continues to crush the ball with an RBI single to double the lead 2-0.

With Rex Brothers now on the hill in the fifth, he continued to twirl zero's, continuing a great spring of his own with a pair of punchouts. The bottom of the fifth is when the Cubs busted things open as they pushed across five runs.

The first was off a Pederson walk in which Alfonso Rivas showed great awareness to steal home, extending the lead to 3-0. One pitch later, Javy Baez was sitting dead red on a heater and cranking it over the centerfield fence for a three-run shot.

Ilderamo Vargas added an RBI single shortly after as the inning was turned over with the Cubs up 7-0. A Taylor Gushue RBI double in the sixth and a Chase Strumpf homer in the seventh capped off the seventh as the Cubs cruised to another big win.

For the second season in a row, the Cubs rotation is built on finesse. Entering the 2021 season, the Cubs have the slowest average fastball velocity in baseball at just 89.6 MPH.

Living on the edges doesn't always work when you don't throw hard, but it does when you have a great defense behind you. The Cubs certainly have that as they won the inaugural team gold glove award in the National League last season as the best fielding team. The Cubs starting staff isn't going to blow you away as they pitch to contact.

However, low velocity leads to low exit velocity, and that is the key. The defense needs to be on their toes when the Cubs starters are on the hill, and no one turns grounders into outs better than them. They will need to continue that again this season.

The first of what is hopefully man more

After being selected in the second round of the 2019 MLB draft, 2B Strumpf has continued to develop into a good hitter. His bat has always been his calling card, and if his defense remains adequate at best, you are looking at an everyday player.

Last season with the Minor League season being canceled, Strumpf spent time at the South Bend Alternate site to get as much work in as possible. That led to him getting invited to the Instructional League in the fall, where he was possibly the best hitter in Mesa. Hoping to see more action this season, the Cubs invited him to spring training.

Since arriving, Strumpf has played sparingly but has shown glimpses of being a legitimate middle of the lineup threat for years to come. The power was on display today as he picked up his first homer of the spring. That is hopefully the first of many more to come.

Wrigley Field to have fans

Ok, this isn't a takeaway from the game today, but it was announced earlier in the day and discussed several times in the afternoon. The City of Chicago has confirmed that both Wrigley Field and Guaranteed Rate Stadium will be allowed to have 20% capacity to start the season with the opportunity for more.

That means roughly 8200 hundred people will be in the seats and 10,000 if you count the rooftops. With around 3400 being allowed at Sloan, you can see the players sensing that energy and feeding off it once again. Although limited, the energy at Wrigley will be crazy this season, and hopefully, that helps this team.