As the saying goes, “there’s no place like home,” and the Cubs couldn’t get back home to Wrigley Field fast enough after this last road trip. Cole Hamels took the mound last night to face a struggling Ivan Nova, as the Cubs hoped to stop the madness.

Hamels got himself into a jam in the first, but Eloy Jimenez would ground into a bases-loaded, inning-ending, double-play. Cole got busy in the second and would end up going a total of seven, allowing just run before he was finished.

Into the bottom of the first, Kyle Schwarber took the first pitch Nova offered and promptly deposited it into the bleachers to put the Cubs up 1-0; a lead that wouldn’t hold up.

After Hamels gave up that run in the sixth, the Cubs failed to get the offense moving, and the 1-1 tie moved its way into the 9th. Enter Pedro Strop. Long story short, he allowed a baserunner, then gave up a two-run blast to Jimenez, with the Cubs failing to walk it off. Final score: Sox-3; Cubs-1.

Cubs/Mets Probable Pitchers: Only limited information is available as of now, but I’ll continue to update, as pitchers are announced. Joe Maddon and Theo Epstein have some decisions to make, as they need to figure out who’ll cover for Kyle Hendricks this week and maybe next. Tyler Chatwood, Adbert Alzolay, and perhaps even Mike Montgomery may see spot starts, as Theo also wants to see Maddon give each of the starters some extra days off.

Today’s question: Who was the worst Chicago play-by-play announcer ever (any sport)? #OneVoteForHawk

Pedro Strop: Pedro Strop is the last guy that I want to speak badly about, as I really like the guy, but having said that, Craig Kimbrel can’t get to Chicago fast enough (more on him below). Strop, for whatever reason, has lost his ability to find the zone, and when he does find it, they’re pummeling him. Much like Mike Montgomery who became an overnight starter last year, Strop’s been thrust into the closer position in the absence of Brandon Morrow. Last year Strop handled closing games out with ease, this year, well, he’s been awful. Maddon has got to quit entrusting him in these close games, as somehow, he’s lost his edge. Not forever, and certainly don’t trade him, but get him out of that closer’s spot.

Chatwood starting: The Cubs have announced that Tyler Chatwood will start Thursday (vs. Mets) in place of the injured Kyle Hendricks.

Craig Kimbrel: The Cubs new star closer has been added to the Iowa Cubs roster and pitched his first game, yesterday in Sacramento. Craig Kimbrel’s first inning of work in an (Iowa) Cubs uniform: 8 pitches (6 strikes), flyout, groundout, strikeout. Kimbrel’s fastball velocity was reported to be hitting 96 mph, with his curve coming in at 85 mph.

Jimenez/Quintana: I think if I read one more comment/post on social media about whether the Cubs or Sox came out better in the Quintana/Jimenez trade, I’m going to be sick. Of course, the Sox think they got the better deal, and about 50% of the comments I’ve seen from Cubs fans seem to share the same sentiment. Newsflash: Done deal, it’s over.

The Cubs traded for a pitcher that they needed, and, in return, dealt an outfielder who they didn’t see being able to get any playing time (had they only known about Ian Happ…) Although a little spotty as of late, Quintana has been a beast. He’s a quality workhorse who chews up innings and gets the job done effectively without being flashy. Jimenez is progressing, and he’s doing well, and that’s great for both the player and team, but the bottom line is if we looked back on every trade, we’d never fully appreciate what we have. For those Cubs fans who still loathe Theo for trading Jimenez, just think how the Marlins are feeling about trading Yelich right about now.

The Cubs paid for a starting pitcher who has stabilized their rotation for 3 seasons and on a team-friendly deal that allowed them to do other things with the payroll.

Yes, they gave up a lot, but they needed the SP help in the present and they got it. https://t.co/AQh9fH7zv2

Baseball quotes: “After I hit a home run, I had a habit of running the bases with my head down. I figured the pitcher already felt bad enough without me showing him up rounding the bases.” -Mickey Mantle

Angels: Anybody need a (formerly) decent reliever? After designating him for assignment, the Angels have released, RHP Cody Allen. Although his career ERA (until this season) hovered around the 3.00 mark, Allen has struggled, pitching to a 6.26 ERA in 2019. 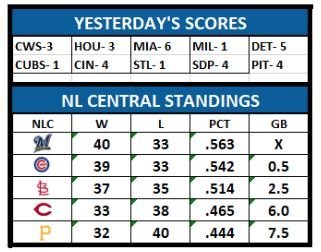