After finishing the series in Denver with a dominant win on Wednesday, the Cubs ventured to the land of the Dodgers for a four-game series. Last night saw Jon Lester (5-4, 3.56 ERA) take the mound for the opener, squaring-off against Dodgers’ righty, Clayton Kershaw (5-1, 3.14 ERA). Before the start of the game, the Cubs placed Carl Edwards Jr. on the IL and recalled LHP Tim Collins.

The Cubs got busy (offensively) right out of the gate. Kyle Schwarber promptly delivered Kershaw’s first pitch over the center field wall, followed by Kris Bryant’s walk, Anthony Rizzo’s double, then after Javier Baez’s groundout, Willson Contreras’ single to score KB. After Albert Almora’s strikeout, Rizzo would get picked off trying to score on an attempted double steal to end the frame. Kris Bryant would add another run in third on a solo shot to right-center, but the fun stops here.

Lester was virtually untouchable for three innings but gave up a pair of two-run homers in the fourth, then a three-run dinger in the fifth, before being replaced by Tim Collins for the sixth.

Collins would give up a homer to Bellinger in the seventh (Bellinger’s second of the game), which would end the scoring for the night. Final: Cubs-3; Dodgers-7.

Today’s question: Has the Cubs season, to this point, been enough for Joe Maddon to get an extension?

Is Lester hurt? After getting smoked in the foot with a low line-drive in the fourth (Freese), Jon Lester quickly waved off attention from Joe Maddon and the Cubs’ trainer, denying any injury. Lester had been untouchable before the incident (Dodgers were 1 for ten up to that point) but beginning with Freese’s hit that tagged Lester (ruled a single), the Dodgers then went 8 for their next 12 (with three homers). This period did encompass Lester’s second and third time through the order, which may have factored into the disaster. Either way, this is a mess. The Cubs can ill-afford to lose Lester (if he is hurt), nor can they withstand too many more outings that give up three-run leads in one fell swoop.

I spoke too soon: Just after writing in my series preview that the Cubs were remaining relatively injury-free, Carl Edwards heads to the 10-Day IL (retroactive to June 10th) for a thoracic strain (upper back). Bad timing for him, as I believe he will be the one demoted when Craig Kimbrel arrives in what I estimate to be about ten days from now. Lefty, Tim Collins was recalled from AAA Iowa.

Kimbrel progressing: Theo said Kimbrel threw 24 pitches to 5 hitters today: "Went great. Right where he needs to be." He’ll throw another one in a couple of days. Theo also said radar gun is where it should be as well. Mark my words: June 24, Cubs vs. Braves (in Atlanta) is when he’ll first run out of the pen in a Cubs’ uniform.

Theo on Hoerner: Epstein says the Cubs’ #1 draft pick from last year, 2B/SS Nico Hoerner, is out of the splint, building up baseball activities now, and should hopefully see game action in two weeks. Hoerner was showing MLB readiness this spring but has been sidelined for the second time since signing with the Cubs last June. Hoerner was initially placed on the IL (April 24) for a bruised hand, but after resuming rehab activities, was diagnosed with a hairline fracture of the wrist.

Hoyer on Ben Zobrist: "We've been in contact with Ben," Hoyer said. "He's been in contact with his teammates. So, he's obviously working through his family stuff. We're giving him his privacy. Certainly, as an organization, we're hopeful that we'll see him in a Cubs uniform again.” We miss you, Ben.

Theo on Ben: "The possibility of a return is there for him later in the season. We’ll see how things evolve. We’d all love to see him back here, and he’d love to be back, so we’ll see if that can come to fruition."

CarGo effect? Going into last night, Carlos Gonzalez had started seven games out of 10 since joining the Cubs. In those games, the Cubs have posted a record of 6-1, and have outscored their opponents 46-21. In the three games that Gonzalez hasn't started, the Cubs are 1-2 and have been outscored 17-13.

Baseball quotes: “Love is the most important thing in the world, but baseball is pretty good, too.” -Yogi Berra 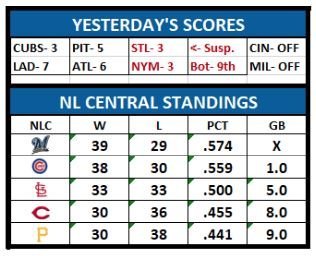