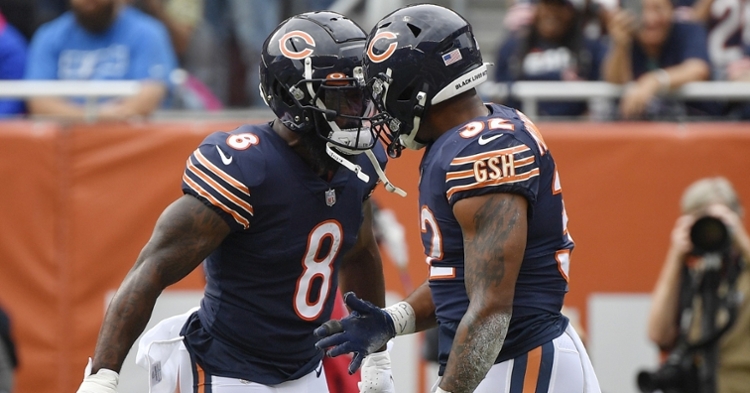 The 3-7 Bears go on the road in a Thanksgiving matchup against the winless 0-9-1 Detroit Lions. On top of this being a matchup of two underwhelming teams, both teams will be starting their backup quarterbacks.

Regardless, we still get to watch the Bears play on Thanksgiving, so let's dive in and see where the Bears may have an advantage.

Andy Dalton vs. Tim Boyle… I am sure this is just the matchup the NFL wanted for the nationally televised Thanksgiving game. Justin Fields likely could have played if not for the quick turnaround with this Thursday game, but Andy Dalton will get the start. Dalton is definitely one of the best backup QBs in the NFL and played well in relief of the injured Fields last week against the Ravens. Starting quarterback for the Lions, Jared Goff, appears to be out due to injury, meaning Tim Boyle will be under center for the second straight week. He was underwhelming last week against the Browns, throwing for only 77 yards with no touchdowns and two interceptions. Do not expect a lot of fireworks from either QB this week, but the Bears have the advantage.

David Montgomery has been back for two weeks and already is the bell cow in the backfield, getting almost all the carries since his return. With Dalton in, this means fewer QB runs, which will likely translate to more carries for Montgomery. Deandre Swift has been on a tear the past couple of weeks, and Jamaal Williams is also back in the mix. If the Bears can keep Swift in check, the Lions will have a very hard time scoring. This matchup is pretty even, but the Lions get the nod with how well Swift has been.

Allen Robinson looks like he will not be suiting up again this week, but Mooney played great as the number one option last week with 127 yards and a touchdown. Marquise Goodwin used his speed to score the go-ahead touchdown and will likely get some more looks again this week with Robinson out, but still expect Mooney to get thrown too early and often. It is also worth noting that Bears wide receivers have had rushing attempts in back-to-back weeks, so they may turn to that again to spark the offense.

One of the Lions' biggest weaknesses is at the wide receiver position. They are lead Amon-Ra St. Brown, and they also have speedster Kalif Raymond that will be in the mix. This group is one of the worst in the NFL, so the Bears have the advantage here, even with Robinson out.

After a few weeks of Cole Kmet being a main part of the offense, he caught just one ball for 12 yards last week. Jimmy Graham ended up with more catches than Kmet, bringing in two for 25 yards. You would think with Robinson out that the tight ends will get more looks this week, but we will have to wait and see. The Lions have a great young tight end in TJ Hockenson, who is by far their biggest weapon in the passing game. Much attention should be given to him because the Lions do not have the receiving talent elsewhere to beat you.

The Bears offensive line has played well as of late after adding Larry Borom into the mix at right tackle. Hopefully, Tevin Jenkins will come off of IR in the next couple of weeks so he can get some experience in his rookie year as well. Cody Whitehair has been a mainstay on this line for years and will be one of the captains for the Bears this week. The Lions have a pretty solid offensive line, especially at tackle. Left tackle Taylor Decker, and rookie right tackle Penei Sewell are good players, but the bears will have some opportunities to bring some pressure up the middle as the center and guards are not the strongest.

Akiem Hicks is out once again for the defensive line, which is no surprise given the short week after not playing just four days before. Eddie Goldman will have to continue his solid play to make up for his absence. The Lions do not have a very strong defensive unit, but Michael Brockers is a veteran who still is a capable pass rusher. Even with Hicks, the Bears have an advantage here.

Roquan Smith continued his pro bowl caliber season after collecting a career-high 17 total tackles last week, now leaving him just five behind the NFL leader in the category. He is proving why he should have been included on the NFL Top 100 list he was snubbed from before the season. Robert Quinn also continues to play great and had 3.5 sacks last week, bringing him to 10 on the year, tied for fifth in the league. The athleticism from Alec Ogletree and Smith will be a big help in defending against Swift and Hockenson. The linebacking group for the Lions is also not great, but they have a good player in Alex Anzalone, who is solid in both the pass and run game.

The Lions have had some injuries to their secondary, and they do not have the depth to have a top-tier unit. The Bears secondary played well for 58.5 minutes last week until that final drive, where they let an undrafted backup quarterback drive down for a game-winning drive. They were able to get their first interception since week four, and they should have multiple opportunities to force a turnover against another backup quarterback. Both units have not been playing well, but the Bears still have the edge.

Kicker Cairo Santos has now missed kicks in back-to-back weeks. Ryan Pace trading another draft pick for Jakeem Grant to help in the return game has not helped either. The Lions have a solid returner in Kalif Raymond, but kicker Aldrick Rosas is only 2-5 on FG attempts this year.